Standing ovation for goal-keeper Brendan at the Oval! 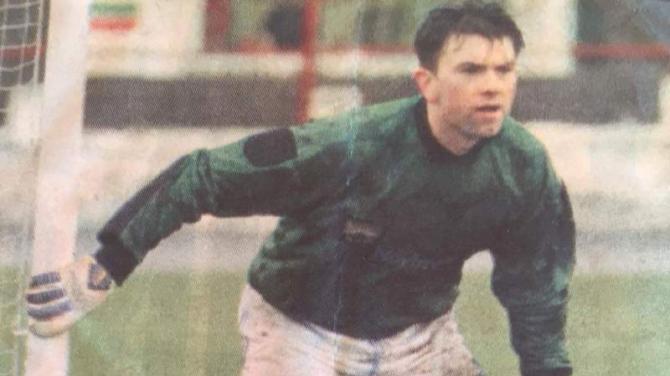 Nowadays the Dubliner is a regular spectator at Ballymena United matches.

And dad takes great delight chauffeuring Conor to Ballymena on a Saturday.

At present Brendan’s other son, Josh, keeps goals for League of Ireland side St. Patrick’s.

The 54-year-old, who is Vice President of Procurement with Jeld-Wen Inc., says he enjoys driving Conor to the United games.

“It is a pleasure to see my son be part of a great club and witness such a warm reception from all involved that Conor receives,” Brendan told Guardian Sport.

“The reception Conor received in Windsor Park after the passing of his Grandad will always ensure a special place in our hearts.”

Former ‘keeper Brendan said Saturday is his favourite day of the week - “We have had some great afternoons with the Sky Blues, long may it continue,” he said.

Meanwhile, one of the stand-out matches ‘keeper Brendan was involved in was against high-flying Glentoran at the Oval back in April 1995.

The headlines in the Newry Recorder read -

The match report outlined that Newry Town’s good League run had been brought to and end, losing 2-1 after a very competitive game.

As a result of the loss Newry dropped back to 15th place in the table, but only by goal difference to Ballyclare.

At that time the Glens were striving to secure their place in the new Super League.

The report gave credit to Newry’s gutsy performance against a very highly rated Glentoran side.

It should have been plain sailing for the Glens - but for two very brave goal-keepers!

Brendan was the first in goal and brought off a series of top class saves, capped by two on each side of the interval from David Cook and James Quigley.

But he was eventually beaten by a superb header from Scottish striker Cook in the 24th minute, and again on the 58th, a rocket left-footer after Michael Smyth put an expert touch to a Quigley cross.

Keeley had to go off after this, to a standing ovation by the Glentoran supporters after feeling the aftermath of a serious Christmas groin operation with severe stomach cramps.

His replacement Mark Campbell , a star at minor level in gaelic football in Armagh, did well to hold the Glens men at bay. After the game Glentoran manager Tommy Cassidy heaped praise “on that man Keeley”, describing him as “superb”.

And Newry’s Sam McCullough, who had been at the club for 40 years, said the ovation as Keeley left the pitch was “one of the most touching experiences I have ever experienced in football.”

These must be very happy memories for Brendan as he reflects on his playing days of 27 years ago.

The big defender has settled in brilliantly at Ballymena - and on occasions has been described as “a collossus” by United manager David Jeffrey.

Keely has chipped in with three goals this term - and has admitted his tally should be much more.

Yet again DJ looks as though he has unearthed another gem for the Sky Blues.