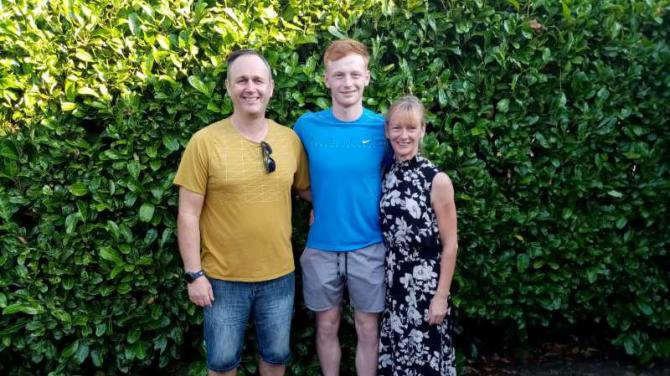 ‘KEEPER Connor Friel jetted back to the States on Sunday - to continue his soccer scholarship at SCAD College.

The Broughshane teenager is on a four year course studying for a Bachelor of Art in Marketing and Branding.

Based in Savannah in Georgia Connor has completed his first competitive soccer season.

The 18-year-old was home for Christmas but flew back at the weekend to begin his soccer training and full time studies.

Connor’s side will play a few friendlies and some minor tournaments in preparation for the Nationals which resume in August.

The Uni side reached the quarter finals of the Sun Conference, losing on penalties.

They were playing in a very competitive League; the second top side Kaiser University from Florida, went on to win the USA wide National NAIA title (for all US universities) in December, with a 2-0 win over Keiser University Athletics.

Connor’s team lost 2-0 in a tight match to Kaiser earlier in the season.

Meanwhile, Connor has settled in well at the College with his team mates from all over the world including Germany, Austria, Jamaica, USA, England, Wales and Scotland!

Connor had a very successful first year as a Freshman student (youngest there).

He played every competitive match for his College - extremely rare for a Freshman and especially rare for a goalkeeper!

He picked up ‘Player of the Year’ and finished in the top three ranked goalkeepers for his conference.

“I am looking forward to my second season at SCAD hopefully pushing on to represent my conference in the Nationals next year,” Connor told Guardian Sport.

Connor says he has loved every minute of his time there, and speaks very highly of the weather!

His greatest challenge has been juggling studies with travel and full time training and playing.

The team trains twice a day, before and after classes, as well as having an analysis session in the evening.

Because the USA is so large many of their matches involve a 7-8 hour coach trip with an overnight stay.

Connor says it is a challenge to fit in coursework alongside this.

“But it has taught me the importance of planning my work,” he told Guardian Sport.

“Most of their away games have been played in Florida and I have has also managed to have some down time - my highlight being getting to see so much of America in a short space of time and making friends with new teammates from all over the world.”

Connor kicked off his soccer career as ‘keeper with Greenisland, then Linfield and Ballymena United Reserves.

He also had a spell with Premiership side Carrick Rangers.