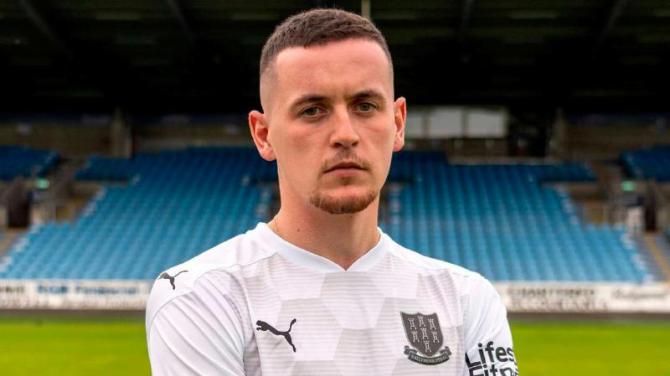 STRIKER David Parkhouse netted the winner for the Sky Blues in Monday’s ‘derby’ clash at The Showgrounds.

In added on time he struck the killer blow, getting on the end of a cross from midfielder Brendan Barr to poke the ball in past substitute ‘keeper Martin Gallagher.

Ballymena got off to a flying start in front of the big holiday crowd, Paul McElroy, firing them in front after just four minutes.

And from his quick thinking kick up field Kenny Kane flicked on a header for McElroy, who finished in style.

Five minutes later the work looked to be undone when a sloppy back pass was intercepted by the usually lethal Conor McKendry.

But he hurried his chance and to the relief of United he shot into the side netting,

Next chance fell for the visitors and, from a Lyndon Kane cross into the box, their captain Stephen O’Donnell powered in a free header which Johnston saved.

Coleraine came close to equalising when United defender Chris Rodgers misdirected a header at his own goal, but Johnston came to the rescue and flicked the ball over his own bar.

At half time Coleraine brought on sub Eoin Bradley, for Ronan Wilson.

Minutes later the visitors lost their ‘keeper Gareth Deane, who injured his back after falling awkwardly when he went to collect a high ball.

Oran Kearney made another substitution, bringing on James McLaughlin for Matthew Shevlin.

It was an inspired move for two minutes later, with his first touch, McLaughlin chipped the ball from distance over Johnston and into the back of the net.

Two minutes from time United captain Leroy Millar had an opportunity to wrap up the points, but sent his thunder strike from close range right at Gallagher, before the ball was cleared.

With the injury to Conor McKendry (ankle) there was seven minutes added to the time to be played.

And late on Parkhouse, who is not long back from a serious knee injury sustained in the opening game of the season, was in the right place to get on the end of Barr’s cross before shooting past the Coleraine ‘keeper.

It was an exciting finish with Coleraine’s Josh Carson watching his well struck goal bound shot being diverted by Johnston.

And just as United were about to counter break the Referee blew for full time.

United boss David Jeffrey applauded the home supporters, who returned the compliment, before he disappeared up the tunnel.