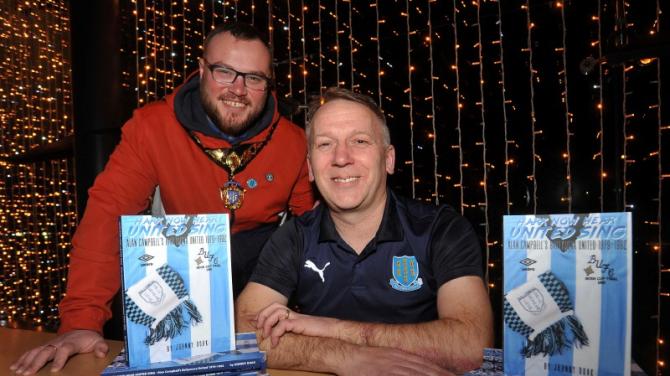 Hitting the shops this week in time for Christmas is a new book looking back to the heady days of Ballymena United under manager Alan Campbell.

Arriving at the club in 1979, Campbell transformed the team from whipping boys to title chasers. 'Hark Now Hear United Sing' tells their story...

Wearing the Argentinian-style sky blue and white striped shirts, United were a match for anyone in the Irish League and picked up three trophies in two seasons and qualified for European competition two years in a row.

The book's author Johnny Doak spoke to Guardian Sport about how and why he decided to put the book together...

"When I had been doing my research for the Saturday Morning League history I rediscovered the story of this particular team. I saved lots of news items and match reports just to take a look through sometime, as I had grown up watching Alan Campbell's team.

“When I realised it was forty years since they won the Irish Cup in 1981 I decided to try putting some sort of book together."

The book features contributions from many of the 1981 Cup winning side and manager Campbell as they look back on their time at the Showgrounds.

Big wins over Linfield, Glentoran, Coleraine and others are recalled as the players and management relive those three action packed years.

Tracking down players from forty years ago proved to be quite a challenge at times but Johnny managed to catch up with all those surviving players who won the Cup in 1981 plus a few more.

"I didn't expect that anyone would be too interested in me rehashing facts and figures from forty years ago, so I decided to speak to as many of the players that I could get hold of.

“I started off with a list of  names from the final itself and added a few who played their part in Alan's squad.

“Some were quite easy to reach and I had great help in getting contact numbers though some proved a bit more difficult. Alan's number two Ivan Murray was the first person I spoke to and it just grew from there.

“There were quite a few random connections made to get in contact with some of them. Through a guy I work with, who used to live in the same street as Alan Campbell's son, I got to speak with the manager himself.

“ I'd almost given up hope on a couple but social media was a great tool as I eventually managed to find Ronnie McCullough on there and enjoyed a lengthy transatlantic call with him."

Once the tick list had been completed, the book was put together including a centre section including some never seen before photos.

"Darren Crawford and myself went up to see Alex Donald one evening.

“Alex produced a box of mementos from his career including some old Polaroid pics from his days at the Showgrounds.

“The sort of stuff no-one had ever seen before, so thanks to Alex they feature in the photo section. There's also a couple of pictures my late father took of the team arriving back in Harryville on the night of the Cup win in 1981."

At just over 200 pages the book is reasonably priced at £10 with the profits going to support the work of Dementia NI. Johnny explained why he had chosen that particular cause.

"When I spoke to Alan Campbell, he explained that he spent his time now a day’s looking after his wife who suffers from dementia.

“A couple of close friends of mine had family members who had suffered from the same illness so I was aware of how tough it can be to deal with. Dementia NI is a local charity and they are currently setting up a group in the Ballymena area so it made sense to raise some money for them."

The book is available from The Picture Box in the Tower Centre and Diamond's Newsagents on Broughshane Street, The Kiosk at Ballymena Train Station and will be on sale from the BUFC club shop at Friday night's League fixture against Larne.