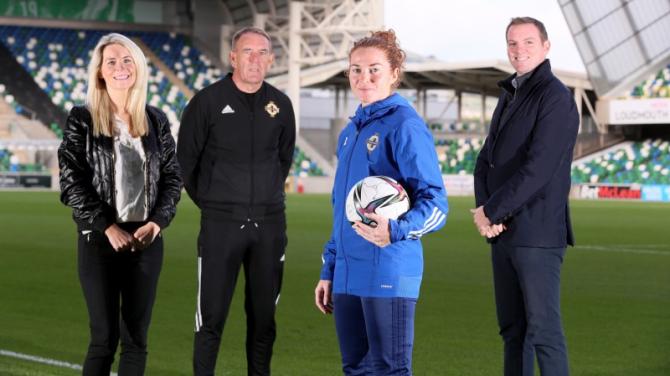 The agreement will see every home game for Kenny Shiels’ side live streamed on BBC iPlayer. Northern Ireland’s World Cup qualifying match against England on Friday 8 April 2022 will also be shown live on BBC network and BBC Two NI.

The tournament will be staged in England next summer and will be shown live across the BBC. The draw for UEFA Women’s EURO 2022 takes place on Thursday 28 October and is live on BBC One NI from 4:30pm.

Ahead of the draw, BBC Sport NI will live-stream Northern Ireland’s FIFA Women’s World Cup qualifier against Austria on the evening of Tuesday 26 October (kick off 7pm).

Thomas Kane is on commentary with former Northern Ireland international Gail Redmond providing analysis. Nicola McCarthy will be bring all the pre-match news and post-match reaction across TV, radio and online.

Northern Ireland senior women’s captain, Marissa Callaghan, said: “This partnership with the BBC means more visibility and connection with fans of all ages right across the country. Having our games broadcast live on a regular basis shows just how far the women’s game has come.”

Executive Editor of BBC Sport NI, Neil Brittain, said: “This is a really exciting time to be extending our partnership with the Northern Ireland women’s international team. With the EUROs just a few months away and a strong start to World Cup qualification already achieved, this is a group of players that is bringing pride to football fans across Northern Ireland. We look forward to bringing these matches free to audiences and to telling the story of this team next summer and for the next five years.”

Northern Ireland senior women’s manager, Kenny Shiels, said: “I am so proud to lead this group of players. They are role models to every young girl in Northern Ireland and I am delighted that this deal with the BBC will allow many more people in homes across the country to follow their impressive achievements.”

Irish FA CEO, Patrick Nelson, added: “There has never been a better time to be involved in women and girls football in this country and we’re delighted that the BBC are coming on this journey with us. More live games means more visibility for the players and this will help the game, like our brilliant senior women’s team, continue to go from strength to strength.”