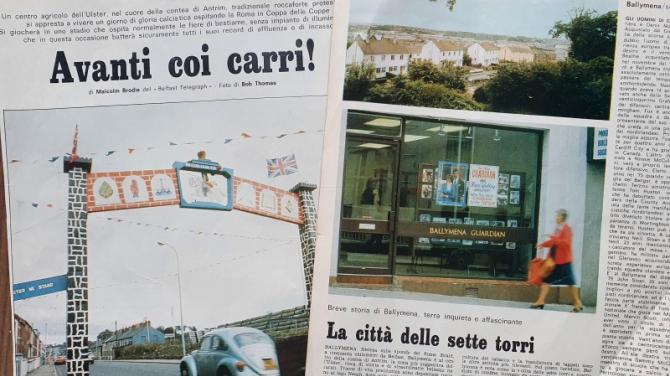 Forty years on, Johnny Doak takes a look back at one of the most memorable games in the history of the local football club…

When competitive European football reached Ballymena in the late 1970s, initial opponents from Belgium and East Germany lacked the class and sophistication that the local footballing public craved to see when the competition draws were made.

In July 1981, United were rewarded for their Irish Cup win two months previously when they were paired with Italian side AS Roma in the European Cup Winners Cup with the games to be played in the latter half of September.

Ballymena United were enjoying a period of unprecedented success under manager Alan Campbell and after two seasons challenging for the top prizes Irish League football offered, they were regarded as one of the big guns of the local game.

The news of the draw was like manna from heaven for club treasurer Ken Hood who reported at the club’s AGM during the summer that Ballymena United were now debt free. Hood put the upturn in United’s financial situation down to the success of the team and reported an increase of £10,000 on the previous season’s gate receipts while season ticket revenue had doubled.

The summer of 1981 was a turbulent time in Northern Ireland with the hunger strike at the Maze prison dominating the news headlines. The Home International Championships were affected after England and Wales refused to travel to Windsor Park and while Ballymena remained relatively peaceful, a car bomb which exploded on the last Friday in August outside Greer’s Travel in Linenhall Street wouldn’t have provided a big incentive to travel for Italian fans who might have wished to follow their team to Mid-Antrim a couple of weeks later.

A Dublin-based Italian journalist with the Corriere dello Sport, Concetto La Malfa, visited Ballymena early in the new season and helped to dispel any doubts that visitors might have about taking in the game.

Guerin Sportivo, the renowned Italian based sports magazine, ran a four-page feature on the Sky Blues ahead of the tie. Describing United as a team with ‘agonismo’ (competitiveness), ‘spirito di corps’ (team spirit) and ‘entusiasmo’ (enthusiasm). Ballymena’s part-time squad was referred to as ‘quasi semipro’ (almost semi-professional), with the players said to be playing more for the love of the game than what financial rewards they received.

The Showgrounds was termed a ‘proprieta municipale’ (council property) which didn’t have the luxury of being an exclusively footballing stadium and also hosted agricultural fairs, livestock exhibitions and horse-riding competitions. As the venue was ‘senza impianto del illuminazione’ (without a lighting system’, the match would have an afternoon kick-off.

Ballymena, ‘la città delle sette torri’, was described in the article as a stronghold of Protestantism and the base of ‘il reverendo’ Ian Paisley while a picture of the Queen Street orange arch was featured.

The town itself was undergoing rapid transformation with the North Road now joining the southern and northern approaches while in the heart of the town centre, steel framework was in place making up the shell of what would be the Tower Centre a year later.

On the pitch, United’s form was a mirror image of what it had been over the past two seasons. Two wins in their opening seven games in the Ulster Cup meant that their defence of a trophy they had won a year earlier was over before it had barely begun. The squad had altered a little over the summer with left-back Nigel Worthington leaving for Football League side Notts County and Pat Mullan heading to Coleraine while Frankie Moffett, a long-time Campbell target, and Seamus McDowell came the opposite direction. Classy defender Tony O’Doherty arrived from Dundalk on the eve of the season to add to Ballymena’s defensive options.

Injuries to key players had also been an issue in United’s dismal start to the season. Striker Sammy McQuiston was admitted to hospital in the early summer after suffering pain and swelling in his left knee before undergoing an operation to remove a piece of gristle. Tony McCall had been forced to miss the Irish Cup Final a few months before and had yet to return to full fitness. Both players hoped to be part of the side which faced the Italians.

As for Roma, they were approaching the tie after one of the club’s greatest seasons. The ‘Giallorossi’ had finished as runners-up two points behind Juventus at the top of Serie A and picked up the Coppa Italia beating Torino in the final. Striker Roberto Pruzzo had won the Capocannoniere award for the league’s top goalscorer with a return of 18 goals, no mean feat at a time when defence was paramount in Italian football.

Coached by Nils Liedholm, a World Cup finalist as a player with Sweden in 1958, the Roman side were captained by Bruno Conti, a 26-year-old Italian international who played predominantly as a right-winger. Their other established star was Brazilian midfielder Paulo Roberto Falcão who had joined the club in 1980. Falcão was an elegant midfielder who controlled the tempo of his side’s attack.

The Italian side landed in Northern Ireland the day before and were staying at the Dunadry Inn, close to the airport. On matchday, they were entertained in the Town Hall by Alderman John McAuley where the visitors, led by club president Dino Viola, were presented with ties, Seven Towers plaques and official Ballymena guidebooks.

As kick-off approached, anticipation grew among football fans in the town. United fan Rodney McLaughlin was a 12-year-old Cambridge House schoolboy at the time and recalls the clamour of getting to the game.

“We didn’t get out of school until 3.20 so getting home to get changed and up to the Showgrounds for a 4pm start meant time was tight. I can remember the panic of getting there with minutes to spare until kick-off. Once we got in at the Warden St turnstiles we got as far as the wee slope in front of where the clock is now and stayed there.”

When the teams took to the field, United were resplendent in a new strip. Manufactured by adidas, the tops were white embellished by a sky blue pinstripe and v-neck with sky blue shorts and socks. Like a team of Davids preparing to meet their Goliath, Ballymena lined up with Denis Matthews in goal behind full-backs Geordie Beattie and skipper Graham Fox. Ronnie McCullough and Tony O’Doherty occupied the central defensive berths while John Sloan, Seamus McDowell and Davy Neill played in midfield. Up front, Paul Malone played through the middle with Peter McCusker and Frankie Moffett either side of him. French referee Michel Vautrot got proceedings under way in front of a packed house.

If the crowd had come expecting a goalfest, the Ballymena back-four denied them. Marshalled superbly by Tony O’Doherty, the home side trotted back into the changing rooms under the O’Kane’s Chicken stand with their goal intact at half-time.

Twelve minutes into the second half, winger Odoacre Chierico gave Roma the lead after he was put through on goal by 22-year-old midfielder Carlo Ancelotti. Despite conceding, United battled on and it was only in the closing stages of the game when Ancelotti added a second on 88 minutes.

Ballymena hadn’t disgraced themselves and the local footballing public went home happy with their own team’s performance and the quality of the opposition.

Two weeks later, Alan Campbell’s side travelled to the Italian capital for the second leg. Sightseeing tours had been organised as the United delegation took in St. Peter’s Square and the Coliseum. Campbell was handed a bonus before the game when Sammy McQuiston was declared fit to play. The pacy striker had been desperate to take part in the tie and his determination to get fit was rewarded. Tony McCall, a dynamic presence in the midfield, had come through a weekend reserve game and took his place on the bench.

In an act of self-preservation, Ballymena began with a back-five with teenager Tommy Huston stepping in at left-back and Graham Fox moving infield to play alongside O’Doherty and McCullough. McQuiston replaced Peter McCusker while Moffett also dropped to the bench.

The Stadio Olimpico was far from full but that didn’t lessen the experience for the Ballymena players. The reality was they were happy to keep the scoreline respectable. Luciano Spinosi opened the scoring in the 26th minute before star striker Pruzzo doubled the lead before the break. The same player added a third goal just after half-time and Paolo Giovanelli completed the scoring on 55 minutes.

With the job done, Roma took the foot off the pedal and the visiting players did their best as the game ended to be close to one of the star men at the final whistle for a jersey swap.

For Ballymena the European tie represented a rare high point in a season where they struggled to maintain their trophy-winning form. Manager Campbell departed early in 1982 after a cup defeat at Distillery and United struggled to recapture their trophy winning formula.

In Round Two of the Cup Winners Cup, Roma succumbed to Porto but a season later in 1983 became Serie A champions. Falcão was one of the stand-out players in the World Cup in Spain in 1982 as part of a fabulous Brazil side who were beaten by Italy in the second phase of the competition. His career came to an end after the World Cup in 1986 and he spent some time managing both club and international teams before becoming a football commentator in his homeland.

Bruno Conti was a World Cup winner in 1982 with Italy and his performances on the wing earned him a player of the tournament accolade from Pele. He remained with Roma for the rest of his playing career making over 300 appearances before his retirement in 1991 when he joined the club’s coaching staff. He is currently Head of Youth Development.

Carlo Ancelotti, a goalscorer in the first leg, moved to AC Milan in 1987 where he won two Serie A titles and two European Cups as a player. After his playing career ended, he became a hugely successful manager winning League titles in Italy, England, France, Spain and Germany. He also won the Champions League as a coach with both AC Milan (2003, 2007) and Real Madrid (2014) and has now returned to Madrid for a second spell as manager.