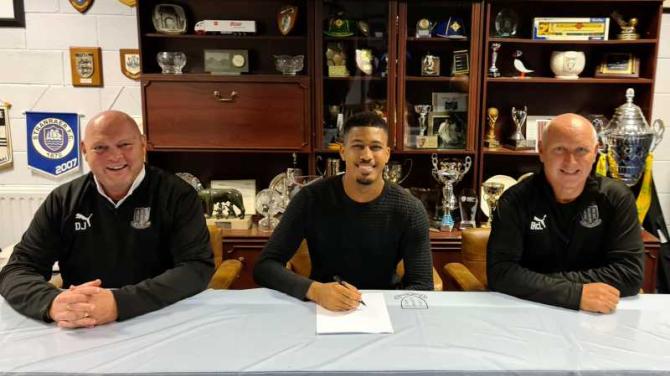 The front man joins as a free agent having last played for Woking FC in the English National League.

Smith has been registered in time to be in contention for Saturday’s home Premiership with Glenavon.

United Manager David Jeffrey moved quickly to sign a new striker following the news earlier this week that David Parkhouse will be out for sometime following his injury in the opening game of the season.

“We knew we had to make every effort to see if we could strengthen outside the transfer window. David was signed to lead the front line, but was unfortunate to be on the end of a tackle that has curtailed his start with us,” boss Jeffery told the Ballymena United website.

“We were against the clock to identify, bring across and observe any new players, but Jonte came with good recommendations, he was as keen to have a look at us as we were him and he has taken part in training with utmost professionalism. Ultimately from what we have seen, every box has been ticked for both him and ourselves. I am absolutely delighted and have to say thanks to those who worked tirelessly until late last evening and then picked the baton up early this morning to ensure paperwork was completed to have him cleared in time for Saturday.”

Smith told the website that his first impressions have been great. He enjoyed a tour of the stadium and the facilities this week and said it is a great place with a great surface.

“I felt early on that I will enjoy it and be very happy here. Leroy (Millar) and Dan (Bramall) took me out for lunch and got a tour of the area also, which made coming into training easier in terms of knowing a few faces and already starting to build relationships,” said Smith on the website.

“I feel I trained well and felt comfortable and all has went well from there on. It was a bit of a rush to get it all cleared this morning ahead of tomorrow’s game, but I believe it all came through with a minute to spare and I’m glad to move forward as a sky blue now.”