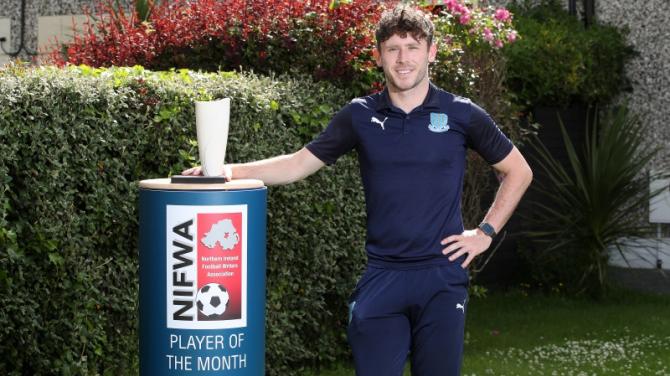 BALLYMENA United striker Shay McCartan is the Danske Bank Premiership Player of the Month for May.

The 26-year-old produced some fine performances in the month, netting seven goals for the Sky Blues.

Northern Ireland international McCartan signed for Ballymena last summer after a decade in the Football League that saw him play for Burnley, Accrington Stanley, Bradford City and Lincoln City.

Upon collecting the award, McCartan said: “I was delighted to receive the reward. It’s always nice to get a bit of personal recognition, particularly at the end of a really long season.

“I was pleased that I was able to score so many goals this season, and I’m hopeful I can take that form into next year.

“My first year at Ballymena has been a big change, after 10 years in England. I’m working full-time and training twice a week with Ballymena, so it’s been a change of pace for me, but it’s a challenge I’ve enjoyed. I’ve signed up for the new season and I’m looking forward to it.”