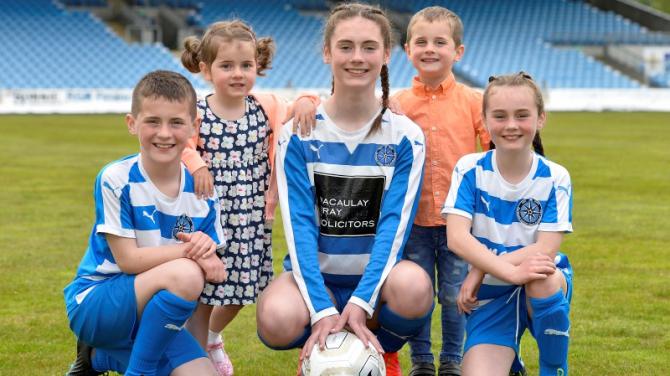 The 14-year-old currently stars for local side Northend Youth in the Lisburn League, and is part of the Irish Football Association’s N.I. Ladies Development squad.

Each Sunday morning Clodagh attends Jordanstown Campus where she trains with the 2007 squad, coached by Stevie Graham.

It is her ambition to play for N.I. Women, currently managed by Kenny Shiels.

The talented teen has represented N.I. at the Manchester City Academy.

At a tournament in Oakham back in 2019 Clodagh played against Arsenal, Suderland, Birmingham City.

Her side lost to Leicester City in the final.

Covid permitting the St. Louis Grammar School ace will represent Northern Ireland again in the tournament this August in Wales.

The former Moneynick Primary School pupil was recently presented with a new pair of football boots by Northend FC to mark her N.I. selection.

Clodagh plays for the 2007 Northend team and is coached by Neil Stewart and Sean McKay.

Being the only female on the side does not cause her the slightest concern.

She was named Under-8 and Under-11 Player of the Year!

At the age of nine Clodagh was invited to the Northern Ireland Ladies Regionals at Cookstown MUSA where she trained each Tuesday night for the Tyrone/Fermanagh region, under the expertise of Noel Mitchell.

Impressed with the young Toome player they suggested Clodagh should have a try out with the NI Women’s Development squad - a move which paid off as she has been with them for the past three years.

Proud mum Clare said Clodagh would love to be a professional footballer!

And talk of securing a professional soccer scholarship in America is also part of the teen’s plans.

Although steeped in sport Clodagh has no intention of ignoring her academic plans for the future.

Come September she will embark on her GCSE’s which include Further Maths, Business Studies, HE, and, of course, PE!

Mum Clare said she and husband Dan are “extremely proud” of all their children.

“Ronan and Iona are following in Clodagh’s footsteps as both play for Northend and Kickhams (Creggan).”

She continued - “As her parents we are extremely proud of her and all our children! We are a permanent taxi service for the five of them often going different directions at the weekends to fulfil their training and match needs.

“We often pull in the help of aunts uncles, grandparents and friends for extra lifts! To them all we say a very special thank-you. But for us, every early morning start, and every load of washing dirty football kits is worth seeing them doing what they enjoy.”

Clodagh, who plays left wing or left back, kicked off her football career at the age of seven.

She had been attending a friend’s birthday party at Ally McGarry’s house and as they played a bit of football Clodagh was observed ‘running rings round the boys’!

Ally suggested she should come along to Northend FC and do some training with them at The Showgrounds.

There she was coached by Ally and John Devlin before joining Alex McDonald’s 2007 team.

She was coached by him for 5 years, along with helpers Petar Jamnicky and Jason “jaunty” Johnston.

Clodagh was involved in Small Sided Games at the Ballymena venue and then spent two years at Coleraine University (Harry Gregg League) before joining the Lisburn League.

The Toome ace was part of the side which won the Lisburn Shield in ecember 2018, beating Lurgan Town.

And they got to the final of the Shield in The Foyle Cup in July 2019.

And footbal is not the only sport in which Clodagh thrives!

As a younger child she played Camogie and Gaelic for Kickhams Creggan GAC just outside Randalstown.

She is curretly an integral part of the Kickhams Creggan Ladies U-14 and U-16 squads, where her soccer skills prove a great advantage on the Gaelic pitch.

Clodagh excels in midfield or forward.

She was their U12 Player of the Year.

Recently Clodagh played against her cousin Abigail McLarnon in the U14 League.

Clodagh has also played hurling at Croke Park where she represented her Primary School, Moneynick PS in the half time go games during the All Ireland semi final back in August 2017.

Meanwhile, dad Dan says the football pitch he made in their garden certainly got quite a bit of use during lockdown!

Clodagh used many of the training Apps recommended by the NI Women’s squad.

The St. Louis pupil has been with Northend for a number of years, joining and progressing from their successful Football Development Centre.