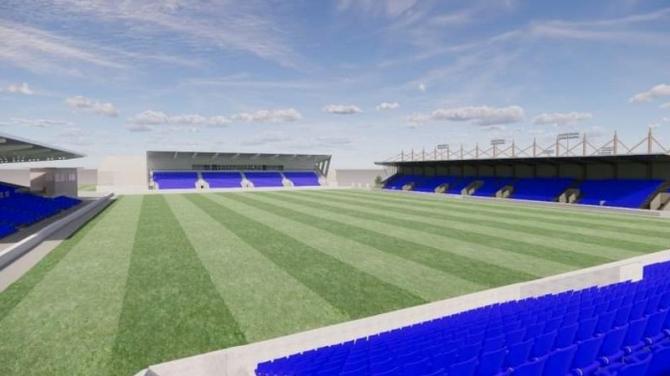 NEW Mid and East Antrim Deputy Mayor, Cllr. Matthew Armstrong, has said the Ballymena Showgrounds Masterplan will be an enormous asset to the sporting community.

Speaking as last night’s full meeting of Council, as he proposed the adoption of the Masterplan, the Cllr. said in particular it will be a major plus for Ballymena.

“Whilst dependent on Stormont funding, the Council staff and the MEA United working group continue to push for its release and the work undertaken to date in developing these plans has been very impressive,” he said.

In today’s (Tuesday) Ballymena Guardian we reported that the Showgrounds Masterplan came up for discussion at Monday night’s Mid and East Antrim Council meeting.

The purpose of the report was to update Council on the finalised details.

MEA have developed the necessary improvement plans and business case to ensure a successful bid for Department of Communities funding and to maximise the collective strength of all parties working together to lobby for the urgent release of this funding and to see the funding amount increase.

Discussions and site meetings have been ongoing to finalise the Ballymena Showgrounds Master Plan.

Guardian Sport understands the Masterplan includes an additional stand at each end of the main arena - one covered one uncovered.

And a new 250 seater covered stand, up to Intermediate status, is to be go adjacent to the existing 3G pitch.

The Poultry Hall is to be removed, but the four grass pitches are to be retained.

It is also understood there will be a public consultation will be held.

Guardian Sport is also aware that there are plans to make Ballymena Showgrounds the National Training Centre of Excellence for ladies football.

Meanwhile, Ballymena United were being linked with former Linfield centre half Jimmy Callacher.

And Seaview side Crusaders were also reported to be watching the situation, along with Larne and Glentoran!

But Callacher is staying put at Windsor Park, having just agreed a new one year deal.

United boss David Jeffrey will have drawn up his who-goes-who-stays list as he works on preparing for the new term.

Centre half Kofi Balmer has left for Larne, keen to take up the challenge of full time football with the Inver Park men, who qualified for Europe on Saturday night with a 3-1 home win over Cliftonville in the Euro play-off final.

Glendinning, who put in a transfer request earlier in the season after being unhappy at not commanding a regular frst team spot, played 158 times for the Sky Blues.

And Warrenpoint Town’s centre-half Danny Wallace is being talked about regarding a move to United.

Earlier in the season it was reported that Dungannon Swifts’ Dougie Wilson had signed a pre-season contract with Ballymena.

Ballymena had four players in the Northern Ireland Under-21 squad.

They were Trai Hume (now back with Linfied), Ben Wylie (back with Celtic), Ryan Waide and Kofi Balmer (now with Larne).

Wylie and Waide got on the scoresheet in NI’s 3-2 defeat by Scotland at Dunbarton. Hume started in that game, and Balmer was captain.