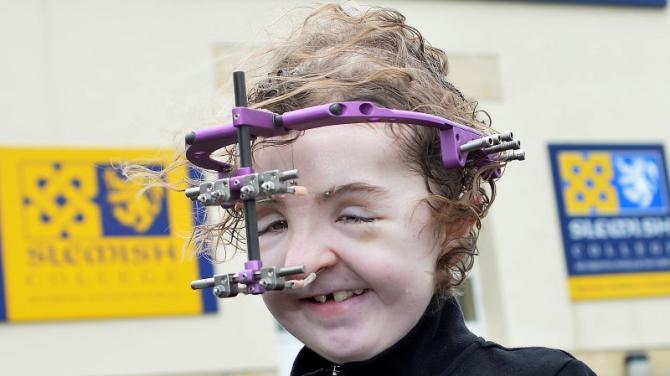 Work is to start soon on converting her garden into a mini football pitch!

Football mad Jessica’s dad Lawrie planned to surprise Jessica when she returned home from Great Ormond Street Hospital - with the pitch in place.

The Slemish College pupil, who was born with Apert Syndrome, a craniofacial condition that affects the development of the head and limbs, underwent life changing surgery back at the end of April.

It was thought she would be in England for up to six weeks.

But Jessica was back home in three, which kicked into touch the plans to have the mini pitch in place, complete, prior to her return.

But the good news is that workers are to go on site within the next week.

North Antrim MP Ian Paisley heard about the pitch surprise and stepped in; a close friend of his, who wishes to remain anonymous, will undertake and pay for the entire project.

On Monday morning past Mr Paisley contacted mum Julie with the excellent news.

Young Jessica is a big fan of Ballymena United.

With mum Julie and dad Lawrie she attended the Sky Blues final game of the season, and watched with great delight as they beat Portadown 4-2.

Weeks ago Mr. Paisley suggested that the United manager could officially open the pitch!

And DJ said he will do all in his power to carry out the duty!