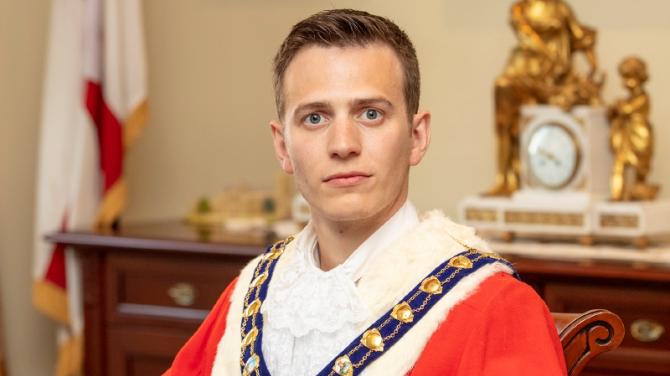 The Inver Park men beat Crusaders in Tuesday evening’s semi-final to set up a mouth-watering showdown with Linfield at Mourneview Park, where they will be aiming to get their hands on the prestigious trophy.

Ahead of the big game, excitement levels are reaching fever pitch throughout Larne, with the community and proud local businesses turning the town red in support of Tiernan Lynch’s men.

The Mayor said: “What an achievement and what a story.

“Larne FC’s rise is the stuff of fairytales, and they have brought the entire community with them. It is a club deeply-rooted within its town and it’s been great to see people rallying behind the team and taking a real pride in their club.

“I want to commend the management, staff, players and fans for the impact they have had on and off the pitch. Larne is firmly on the footballing map in Northern Ireland, and the team, wider set up and facilities are second to none.

“Special mention must go to the man whose vision and dedication has made this all possible – Kenny Bruce MBE. He’s a true hometown hero and his love, passion and drive for Larne is exceptional.

“For those lucky enough to get their hands on a ticket to tonight's final, I know you will raise the roof, and thousands more will be cheering Larne on from their homes. We are all #MEAUnited behind Larne. Bring it home!”

Friday night’s final will be televised live on the BBC and iPlayer.