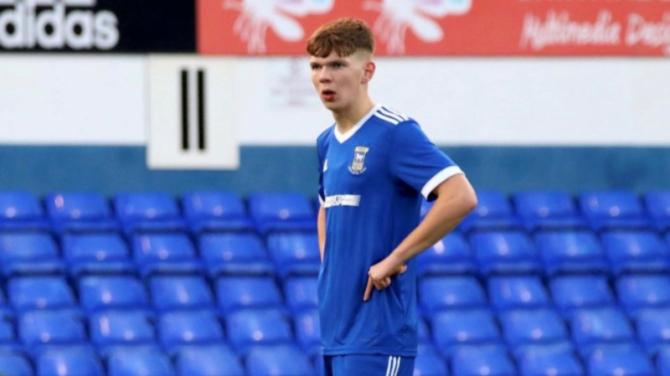 On Friday night they beat 10-man Sheffield United 3-2 after extra time in the rip-roaring tie at Portman Road.

Nico Valentine gave the Blues the lead just after half-time but the Blades hit back via Will Osula and Andre Brookes to go in front.

But Elkan Baggott grabbed a leveller for Town deep into injury time and Harvey Cullinan netted an own goal two minutes from the end of extra-time to see the Blues through.

Ipswich are three-time winners of the tournament – only four clubs (Manchester United, Arsenal, Liverpool and Chelsea) have won it more occasions.

The Suffolk side's most recent success came back in 2005.

Meanwhile, 18-year-old Cameron Stewart is approaching the end of his second season at Ipswich Town.

Stewart joined the Tractor Boys from Linfield in the summer of 2019 and has been on an upward curve ever since.

Playing predominantly for the club's Under 18s, Stewart has also featured for Ipswich's Under 23s and trained with the first team.

Plan to play in first team

His plan is to play for the first team over the next year or two. His past two years have been a massive learning curve. and he says he has improved so much along the way.

Stewart says training with the first team has been a great experience.

“Playing with better players and bigger men, gives you the confidence that you can play at that level,” he said.

He believes a loan spell could benefit him in the long run, helping prepare him for first-team football at Ipswich.

“I could maybe go out on loan next season to the National League or League Two," he added.

“Going out on loan is a positive because you can play regular first-team football. And that brings you on as a player.”

The former Cambridge House pupil started his career with Carniny Youth before spending a year with Coleraine and then moving on to Linfield.

Fulham, Stoke City, Watford and Birmingham City were keeping tabs on the big defender but he opted to join Ipswich Town.

“Ipswich was the right fit for me. At the time I looked at where I could be playing first-team football first. That was the path I wanted to go down," he said.

Stewart says he is enjoying his time with Town.

In his first year he played for the Under-18s, and also trained with the first team. Stewart, who began his career with Waveney Youth, scored in the recent midweek game with Wigan. A few years ago he captained the SuperCupNI team to victory in the final at Ballymena Showgrounds.

* Cameron was named Suffolk News Man of the Match in the FA Youth Cup quarter-final!