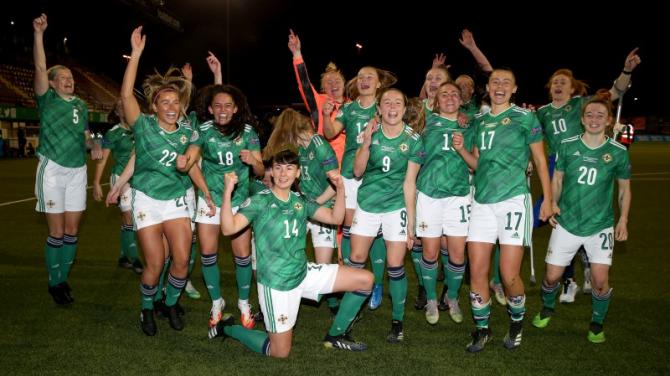 CLAIRE-ANNE Mills reminds the young players at Ballymena United Women and Youth Academy that there is a “brilliant International set-up” just waiting to be broken into!

The Deputy Chair of United Women sings the praises of two former Ballymena players, Chloe McCarron and Sarah McFadden, who were part of Kenny Shiels’ NI Women’s side which made history by qualifying for the 2022 Euros.

“Last Tuesday night, it became clear to girls and young women everywhere that there is no limit to where football in Northern Ireland can take you if you have the determination to get there,” stressed Claire-Anne.

“We are incredibly proud of every member of the NI squad – they are all role models, not only for young girls and women athletes, but for athletes of any age in any discipline.”

The Deputy Chair said they are “particularly proud of two former Ballymena United players who were on the pitch at Seaview, Chloe McCarron and Sarah McFadden.”

“It is very special for our younger girls to be able to see players who used to wear the Sky Blue shirt like them, now pulling on the green and white jersey, representing Northern Ireland on the international stage and going to major tournaments to compete against some of the best teams and best players in the world,” said Claire-Anne.

“They are an inspiration to our players. Our girls know that by working hard and enjoying their football at Ballymena, there is a brilliant international set up, just waiting to be broken into.”

She pointed out that women’s and girls’ football in Northern Ireland is valued and, importantly, it is successful.

Claire-Anne said last Tuesday night, like the rest of the country, the players and officials at Ballymena United F.C. Women and Youth Academy were glued to their screens cheering on the women in green and white.

“After 96 minutes of exciting, engaging football, we were celebrating history being made as the NI Women’s football team qualified for the finals of a major championship for the first time ever,” she said.

“It was a truly momentous moment. Momentous for the current squad, led by the outstanding Marissa Callaghan, and management team headed by Kenny Shiels, after months of preparation and a fantastic qualifying campaign. Their performances over the two legs were magnificent and they have deservedly earned their place at the Euros among Europe’s elite.”

Claire-Anne said the success was a culmination of many years of “resilience, determination and passion” shown by all those across the women’s game who have worked tirelessly to get NI where they are today.

“People like our own Nicky Stevenson, who has served Ballymena United F.C. Women for over 20 years, relentlessly shining a light on women’s football locally and across NI,” she said.

“The success of the NI team didn’t happen overnight and there is, of course, still more work to do to develop the game right across Northern Ireland, making it even more accessible and well supported from the grass roots, right up to elite level.”

Meanwhile, Claire-Anne said at Ballymena United Women they have been delighted to see increasing numbers of new players joining over the last few years.

“At the last count, we have over 100 players registered across all age groups, and rising,” enthused Claire-Anne.

“But the achievement of the Northern Ireland Women could really be the start of something special, something very exciting, especially for girls and young women in Ballymena. We have a fantastic infrastructure, opportunities for girls and women to play competitive football at all age groups and a group of volunteers committed to the development of every, single player who wears the shirt.”

The Deputy Chair recalled that it “was also particularly poignant” that the NI Women’s match came on the same day as Ballymena were able to re-start their Junior training following the relaxation of the public health restrictions.

“The players were already delighted to be back on the pitch but it was fantastic for them to be able to then go home and see what is possible in their sport,” said Claire-Anne.

“As a Club, we firmly believe in the immense power of football for physical health, for mental well being and for the unique sense of community and togetherness it brings. But the NI squad has shown it can be even more for women and girls – it can realise ambitions, raise aspirations and transform lives.”

Claire-Anne said they want to encourage as many girls and young women as possible to get involved and join the incredible journey they are on with women and girls’ football.

“If anyone is interested in getting involved either in our Youth Academy (aged 5 – 15) or the Senior squad (16+), they should get in touch by emailing ballymenaunitedfcwomen

@gmail.com or via Facebook or Twitter. We are also happy to hear from anyone who would be interested in non-playing roles, such as coaching or volunteering,” she said.

“The opportunities are endless and we can’t wait to be a part of the next chapter. For now, on behalf of Ballymena United F.C. Women, congratulations Northern Ireland. Bring on the Euros!”