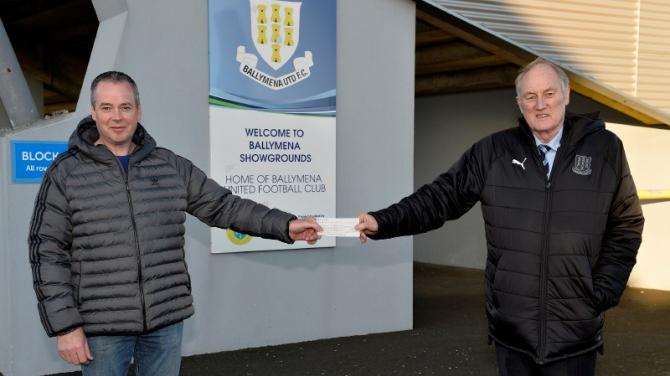 A 'We Love United' fund raising venture by Sky Blue fan Neil McBride has raised £674 for the parent club.

Neil recently presented the cheque to United Chairman John Taggart, and thanked everyone who supported the cause.

Chairman Mr. Taggart thanked Neil for keeping the club in mind in these times of no supporters coming through the gates due to Covid-19.

"Neil's gesture is very much appreciated by all at Ballymena United. These are difficult times and all money raised will go the running of the club. Thank you Neil, and thank you to everyone who supported the We Love United fund raiser,” said Mr. Taggart.

Fund raising organiser Neil outlined that in these hard times everything is being hit financially.

“People, businesses, charities and sporting clubs are all feeling the strain of loss of income. Sports clubs, which for me is Ballymena United, is a way of escape for many, a release from the hard graft of a busy week. It gives me something to look forward to, and helps with mental health issues," outlined Neil.

“Ballymena United are a family club, which could not function without the volunteers who put time and effort into something they love. Many go out of their way to make sure the club runs smoothly, and are often out of pocket to do so.”

Neil explained that he discovered a club in Germany sold out their entire stadium for a match which fans were not allowed in to watch.

“Why would they do that? Because they love their club. And for the same reason that is why I set up the GivingPage , because I love Ballymena United and want to stand with the Directors, Volunteers, management and players as we work hard to get through these times of Covid,” said Neil.

“With the generosity of the supporters we will not be limited by lack of finance to take the club forward.”