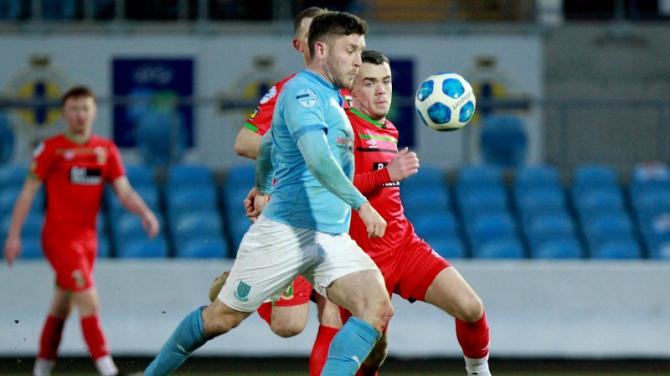 HOT property Shay McCartan has agreed a two year extension to his contact at Ballymena United.

The 26-year-old put pen to paper on Thursday night - much to the delight of manager David Jeffrey.

“To say I'm ecstatic that he chose to stay is an understatement,” Jeffrey told the Ballymena United website.

“I'm so pleased for the supporters, the club and for the rest of the players as he is well regarded in our squad. A consummate professional and we are blessed that we are having his talent here for the next two years.”

McCartan scored twice against Glentoran in midweek, taking his tally to 12 for the season.

The Northern Ireland international said he is happy to have got the deal done.

“I'm delighted to get it sorted. I didn't want it to drag out and not know what's happening year on year,” said McCartan

Other clubs were lining up hoping to lure McCartan from United.

“But none of them suited compared to Ballymena United, and I've moved before in the past at a time that I've been enjoying my football and went on to maybe regret it,” explained McCartan on the United website.

“And it's true to say that I've been really enjoying it here. It's a brilliant club, David and the staff have treated me really well, there's a great squad and we all believe there is something that can really happen here. I wouldn't have signed if I didn't think there was a good chance to win things.”

Getting a player of the quality of McCartan to join United at the start of the season was another brilliant stroke of genius by United boss Jeffrey.

The manager said it “it was a signing that we could never have expected, but the reality was it worked for Shay, “in that being part time was actually in our favour.”

“It was a big statement of faith for Shay and for us, and by his own admission it took him a few games to get match sharp and used to the League,” outlined Jeffrey.

“But his application and commitment to the club has been fantastic and that is clear for all to see. The wonderful thing about this young man aside from his talent is his humility - not only is he a special player but he goes about his business in a quiet manner and works his socks off to a ridiculous degree.”

Jeffrey said they knew other clubs would be keen to speak with McCartan.

“We actively encouraged him to take stock of his situation and make the decision that was best for him. Having gone through that process, it's very simple, he has agreed to sign for a further two years at Ballymena United,” smiled Jeffrey.

McCartan admits that this season for United has been “a little hit and miss sometimes.”

“But when you look at the players who are missing, in reality a full starting eleven has been out, so when you look at us as a full strength team there's no reason we can't go on to do something special,” he said.

McCartan said he has yet to play an Irish League game in front of a full house!

“It is something that you miss with no fans. Playing behind closed doors has become a bit of a normality for this season but it's not what you want to do,” he said.

The United man said signing his contract extension shows he is committed to the supporters and the club.

“It means I can concentrate on my football here without being in the same situation next year,” he said.

“I've had offers to go back to full time football, but I know my own body and the training and matches here suit both myself and the club, and so I look forwarding to keeping that going now.”

He continued - “Working under David and Bryan (McLoughlin) they are honest with me, they know how to get the best out of me. They are special people and I'm really grateful for them looking after me and I'm grateful for the opportunity they have given me now. It's been a good season and I'm hoping to carry that on now.”