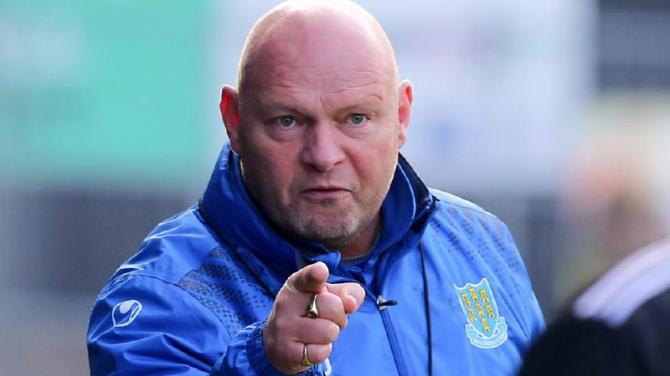 DAVID Jeffrey is relishing the visit of one of the Premiership’s ‘big-hitters’ Glentoran this weekend!

The East Belfast side had mixed fortunes in their last two outings - hitting Carrick Rangers for six, without reply, and then playing out a scoreless draw with Warrenpoint Town at the Oval last Tuesday night.

When the Glens were strutting their stuff against Carrick United manager Jeffrey’s Sky Blues were doing likewise at Stangmore Park!

United came from a goal behind against Dungannon Swifts before putting away FIVE of their own to keep their unbeaten run of five games - four wins and a draw - intact.

As the results from last weekend suggest this Saturday’s United v Glens clash has the potential to be a high scoring encounter.

The last time Ballymena and Glentoran met was back on Friday, July 31, in the final of the Peaky Blinder Irish Cup at Windsor Park.

United’s Cathair Friel, who last week was put on the transfer list after breaching the club’s disciplinary code, got the equaliser in the final to cancel out Paul O’Neill’s opener.

It was that man Robbie McDaid - hat-trick hero in their 6-0 thrashing of Carrick Rangers on Saturday - who broke Ballymena hearts in the final by sticking away the winner five minutes from the end of the second period of extra time.

Back in July United were permitted 250 fans to attend, as were the Glens, in what was the first match in the United Kingdom to allow supporters to attend.

The 26-year-old, one of half a dozen new players brought to United in the Summer as Jeffrey freshened up his squad, is really starting to find his feet, and could be a real threat this weekend against Glentoran.

United will need no firing up for the visit of the Glens this weekend (3pm).

The Sky Blues sit fourth in the table, Glentoran are seventh, their weekend win over Carrick only their second in the Premier series.

United went through a shaky spell, losing for games in a row, but are unbeaten in their last five, winning for and draw one.

Manager David Jeffrey recalled their start of the new season, “coming up against the big hitters, Linfield, Larne and Crusaders.”

“I was not displeased with our level of performance, or quality of our performance. It was simply full timers against part-timers,” summed up Jeffrey.

He said this weekend they are up against another of the ‘big hitters’ - Glentoran. “It is going to be mighty, mighty tough,” and Jeffrey.

Reflecting on United’s weekend win over Dungannon Swifts, Jeffrey said it was a good result, and a very good second half performance.

Ballymena trailed 1-0 at the interval - but following a half time conversation with his players they went out carried out their instructions and scored FIVE without reply!

“We knew coming down to Dungannon would be most difficult. I watched them recently against Coleraine and they were absolutely outstanding,” said Jeffrey.

“And they had a disappointing result in midweek against Portadown. I knew there was going to be a big response. We started brightly and then a penalty was given against us and I am not sure if it was .... it was rather soft but there you go.”

Jeffrey said after that Dungannon were in the ascendancy and went close to getting a second.

“At half time we had a conversation with the players reminding them of their ability and what they should be doing,” outlined the manager. “They responded brilliantly and all of the praise and credit must go to the players The second half was absolutely excellent. They started winning first and second balls which they had not been doing. They passed the ball much quicker with more precision the movement was better and the quality of the goals were first class.”