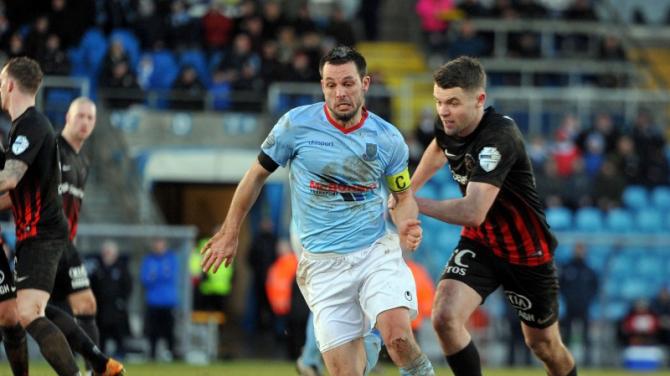 JIM Ervin is perfect proof that there is life after cruciate injury!

The 35-year-old did both knees - but today is playing the best football of his long, and distinguished career.

This news will be very well received by Ervin’s team mate Scott Whiteside, who has just embarked on his rehab journey after wrecking his knee in United’s pre-season friendly against Limavady United back on September.

“I have been speaking with Scott since he picked up the injury,” Ervin told Guardian Sport.

“The first thing I told him was - there is life and football after sustaining such an injury.”

Skipper Ervin sustained his first cruciate injury back in 2008, when with Linfield, against rivals Glentoran.

Ervin worked hard in rehab, following the comeback trail to the book, and before long was back in the Blues side.

Back in 2014 tragedy struck again for the defender, this time his other knee, playing for Ballymena United in the Irish Cup final with Glenavon.

“It is difficult to take when you realise you have cruciate ligament damage,” recalled captain Ervin.

“But once you accept it and get the operation done you can focus fully on working at rehab with the goal of getting back playing again.”

He continued - “On the comeback journey it is a case of keeping your head down and working hard at what you are asked to do. It can be a bit lonely when you are training on your own, along with your physiotherapist, but the end goal, of getting back playing, should be enough to keep Scott focused. All the United players cannot wait for Scott to get back training with us again. There are no nicer feelings than meeting up with the players for your first comeback training session, and then your first match back.”

When at Linfield skipper Ervin had comforting advice from fellow cruciate survivors including William Murphy, Oran Kearney and Davy Lorimer.

“They played a big part in my comeback trail. It was good getting advice and encouragement from them. It certainly helped me,” he said.

And with that in mind Ervin intends playing a similar role for comeback defender Scott Whiteside.

The 23-year-old Garvagh man, who had spells with Derry City, Coleraine and Glasgow Rangers, picked up the knee injury back in September before a competitive ball in the Irish Premiership had been kicked.

It was a pre-season game - thanks to Covid-19 the new term did not actually kick off until October 16 away to Coleraine!

In a freak accident Whiteside buckled and the game was stopped!

He was eventually taken to hospital - and it was later diagnosed that it was cruciate ligament damage.

An operation was arranged and has since been carried out.

United manager David Jeffrey told Guardian Sport that Whiteside has set himself a target of being back playing before the end of the season.

Jeffrey outlined that Whiteside has began his rehab programme.

“Scott is very appreciative of Ballymena United and the way they have taken care of him, and looked after him,” said Jeffrey.

“He knows it is going to be a long journey back.”

The United boss gave praise to player Jim Ervin, who has been on the same journey twice before!

“Jim has been a big encouragement and a big guide and help,” said Jeffrey.

“Scott has had the operation and he is working very hard to get himself back fit and has set himself a wee target to be fit before the end of the season.”