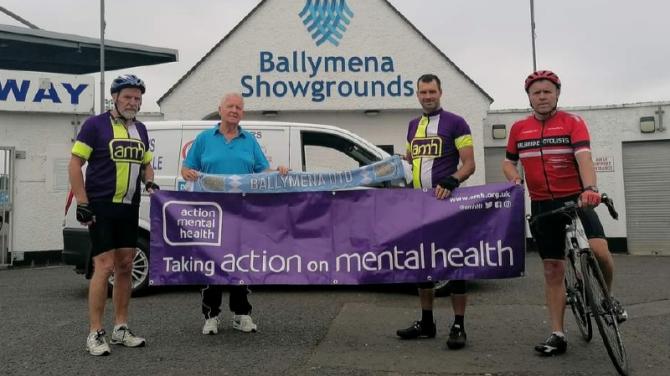 BALLYMENA United have lent their support to a cycling fund raiser for Action Mental Health.

“It was nice for us as a club to do our bit for Action Mental Health,” Don told Guardian Sport.

“Full credit to Mervyn for tackling the three-day 360 miles cycle ride. We at United are delighted to have made a token donation to the very worthwhile cause. And we wish Mervyn all the very best.”

Don also presented Mervyn with a United scarf and a club pennant, which along with other club’s regalia will be raffled at a later date for the cause.

Ballyclare man Mervyn (37), who has suffered mental ill-health problems in the past, cycled to all 24 football grounds in the Irish Premiership and Championship.

His aim was to raise thousands of pounds for Action Mental Health.

At the time of going to Press Mervyn had collected in over £9,300.

The Ballylclare Comrades fan set off from Dixon Park, accompanied by Eddie Turkington and Stuart Dellow.

Chef Mervyn recalls slipping into “a dark place” during his bout of mental ill-health.

He said he is not ashamed to admit to having had mental health issues, saying at that time he was not in a good place.

Mervyn said he needed to do something about it so he went and spoke to a counsellor.

“Just by talking to someone I didn’t know helped me greatly, to get things that had been simmering underneath for so long out and off my chest,” he said.

Mervyn hopes his three-day Bike-A-Thon, as well as raising money, will also raise the profile of mental health.

He points out that football is a sport mainly played and supported by men, adding that there is a stigma attached to men speaking about their mental health.

“It’s heartbreaking to see that people can’t seem to find an alternative but by speaking out about their mental health and asking for help could potentially save their lives,” he said.

“The increase in people, especially men, ending their own lives is absolutely devastating.

“Life is precious. It’s good to talk so people shouldn’t be ashamed and they shouldn’t bottle it all up. By just talking to one person and telling them how they feel, could change everything.”

People from all over have donated to Mervyn’s Justgiving page.

And he thanked all the football clubs he visited on his bike hike who provided an assist for his goal.

He gathered up merchandise from each of the clubs he visited.

Anyone who wants to make a donation should contact justgiving.com/