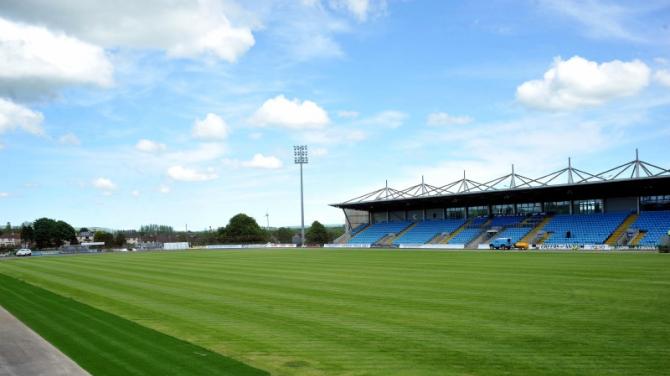 BALLYMENA United, along with Larne and Carrick Rangers, have joined forces with Mid and East Antrim Council in the hope of securing funding for their respective stadia!

The ‘MEA United’ campaign, if successful, will see the clubs cash in on ‘game changing’ Northern Ireland Executive funding.

A taskforce, formed by Council and spearheaded by its Chief Executive Anne Donaghy, is supporting United, Rangers and Larne in their collective vision to transform the Showgrounds, Taylors Avenue and Inver Park..

In 2015, the Northern Ireland Executive allocated £36m for a sub-regional stadia funding programme for local football.

Following the return of power-sharing at Stormont in January this year, the Executive stated its intention to complete the programme, which includes plans to upgrade Irish League venues as well as the GAA stadium Casement Park in Belfast.

Irish Premiership clubs that are capable of hosting fixtures with a 5,000 capacity are eligible to apply for funding, with Ballymena United, Carrick Rangers and Larne all meeting the criteria.

Alderman William McNeilly, Chair of MEABC’s Direct Services Committee, praised the combined efforts and joined-up approach of each of the football clubs.

“Despite being rivals on the football pitch, it is hugely encouraging to see them come together and work collaboratively in this way with Council for the wider good of all in Mid and East Antrim,” said Alderman McNeilly.

“Improving the stadia facilities of the three clubs is an exciting prospect that would no doubt drive a positive change across the borough, raising the standard of sporting events in these individual towns for generations to come.”

The Chairman said this significant investment would be a timely and welcome boost to the local clubs and communities, particularly given the renovation works that have already been carried out at local venues already, as well as the investment that the Irish Premiership as a whole has enjoyed in recent years.

Last year the pitch at The Ballymena Showgrounds was revamped ahead of Ballymena United’s Europa League clash.

Meanwhile, following the purchase of Inver Park by Larne in 2018, the club invested in the installation of a new 4g playing surface and state-of-the-art floodlights.

And since the Irish League was suspended in March, there has been significant investment at Taylor’s Avenue where Carrick Rangers have made a number of improvements to enhance spectator safety at their ground.

Back on July 21 Guardian Sport reported that Councillor Tommy Nicholl again highlighted his dream of having two new stands built behind the goals at the Showgrounds!

The Cullybackey man has long campaigned for this to become a reality.

The long serving Councillor outlined that with Ballymena Raceway now defunct, and Council agreeing to split the funds set aside for stadia improvements, he would like an update.

Guardian Sport also highlighted that Ballkymena Showgrounds is one of the Irish Football Association’s preferred stadia for hosting elite competitions.

Originally it had been down to take place in July - but that was before the dreaded coronavisus pandemic struck.

The UEFA European Under-19 tournament will feature eight teams.

‘Prestigious events like this offer a welcome boost across Mid and East Antrim following the pandemic.

And Council has given the main arena its usual end of season maintenance. This includes sand dressing, seeding and fertiliser.

“It will continue to be maintained to a high standard for when play resumes,” said a Council spokesman.