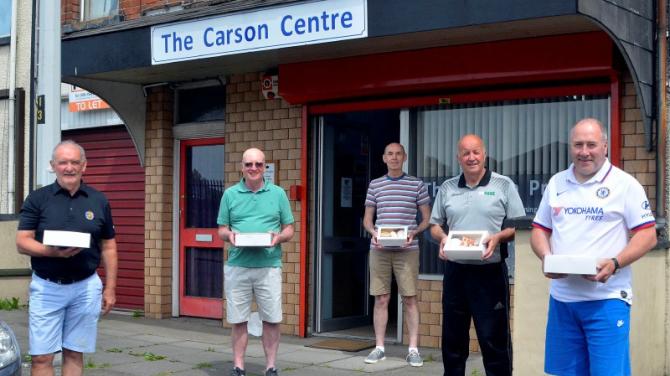 BACK In The Game has put together four Zoom video interview pieces with Ballymena United manager David Jeffrey - the first one being released on Facebook and YouTube on Wednesday (8pm).

The video clips feature a wide range of topics and will make interesting viewing.

The other releases are on Thursday, Friday and Sunday.

In the Sunday afternoon showing boss Jeffrey talks about his Faith.

“They will be something for the local fans to enjoy,” said Back In The Games co-ordinator, Ian Getty.

Video No. 1 relays Jeffrey’s journey through his football career to date, both as a player and his coaching/managerial career.

All United fans will want to hear his thoughts on what has been achieved so far and what the future holds with his role at Ballymena United and inside view of some of the workings behind the scenes at the Showgrounds.

This really is a must for all Sky Blue fans.

In video No. 2 Chairman of Back In The Game, Robin McClintock, talks with the United manager.

Jeffrey reveals his greatest achievement, so far, with the Sky Blues.

In video No. 3 Linfield fan Billy Bell asks Jeffrey about his time with the Blues.

There are some superb recollections with his trophy laden years at Windsor Park.

Back In The Game are very grateful to Jeffrey for taking the time to get involved in their project, which is designed to give their members, and others, something that little different to focus their time on.

“They really are a fascinating insight to one of the most high profile football people in the country,” summed up co-ordinator Ian.

Meanwhile, Back In The Game Ballymena have continued their support for members of the programme by supplying ‘Afternoon Tea Pack’s’ for some of their players who have been shielding, hospitalised and living remotely or on their own.

The gifts came about following an offer from Councillor Rodney Quigley, and The Carson project in Ballymena.

The Harryville based group supplied the packs as a form of support for the Back In The Game players.

Councillor Quigley said The Carson Project is delighted to partner Back In The Game.

“It is a really thoughtful gesture. I am very aware of the great work, both physically and mentally, that BITG are doing and we are delighted to fully support them in their efforts to embrace the local community.”

The recipients were absolutely delighted with the gesture and the fact that both were groups thinking about them through this difficult time.

A couple of months ago Guardian Sport highlighted that BITG had kicked into touch fears of being out of action due to the Covid-19 lockdown.

Their members, known for actively promoting mental health awareness, assumed they could be closed for months, missing their regular get-togethers and fellowship.

But they have dug deep and over the past number of weeks have embraced the world of social media and internet technology with a gusto.

Within a day or two of lockdown a WhatsApp group was established.

“Some attempts at home baking were also on view as well as home fitness schedules. New terminology like ‘Zoom’ started to enter the group’s vocabulary and soon the group was meeting online to chat and reminisce.

“It has further developed to include a weekly quiz for members, which is contested as fiercely as any of our five-a-side games.”

Ian said their music group has continued by remotely recording their instruments and then having them mixed into a finished track and distributed for all to hear.

BITG’s Chaplain Andy Williamson has delivered thoughtful and inspiring messages every Sunday, helping to keep their spirits and hopes high for a speedy resolution to this crisis.

The Ballymena BITG has also reached out to help those throughout the general area who need that little bit of extra help at present.

Using BITG funds, donations of £100 were made to Helping Hands at Wellington Church and St Vincent de Paul.

These charities provide basics of food, fuel and other essentials to the less well off in the Borough.

And as a small token of thanks, Antrim Hospital NHS staff members have been given supplies of coffee, tea and biscuits.

Excellent relationships have been formed with the Irish Football Association and the Mid and East Antrim Borough Council.

Recently Andy Williamson was appointed Chaplain to the group, in partnership with Chaplaincy UK.

In January 2017 Back In The Game Ballymena was launched on a Tuesday evening at the Sports Hut Galgorm.

Three groups played 5-a-side football with players of similar ages, ranging from 30’s right up to players in their 60’s and even 70’s!

In the early months of 2018, a number of men in got together to form the ‘Back in the Game Morning Club’ walking football group.

The idea was to provide the opportunity for men in their 50s and 60s to come together to play a gentle form of soccer in order to help maintain their physical, social and mental wellbeing.

The group is now into its third year and has been going from strength to strength.

With upwards of 70 members, it meets twice a week at the Hut Cullybackey and Wellington Church.

Given Ballymena’s recent history of major job losses, it has also provided a space where many of those workers can go and relax in the company of old colleagues and meet new people.

The group has developed in various ways and has become a real social hub.

A Burn’s Lunch is held every January to celebrate the Bard’s birthday.

And shared interest amongst the men, other than soccer, has resulted in organised golf days, pool competitions and the formation of a music group.

The music group made its first public appearance when it was asked to play at the Ballymena Hub Centre’s 21st birthday celebration in early March.