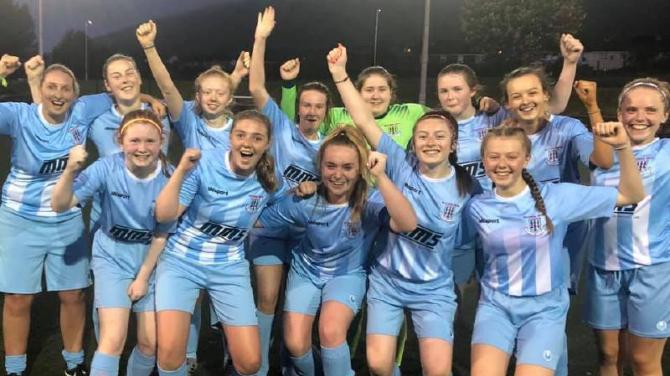 TRAINING well underway, pre-season friendlies under the belt and the first competitive match set for a mouth-watering derby against local rivals Larne Ladies in the Toal’s County Antrim Shield.

But of course, women’s football has taken a back seat as the battle to tackle the coronavirus pandemic continues.

This week should have been game No. 4 for Ballymena United Allstars in the Northern Ireland Women’s Football Association Championship.

And the Allstars Reserves team should have been kicking off in Division 3, following their promotion success in 2019.

As things stand, the Senior Women’s football season – due to run from April until August – has been postponed and is being kept under regular review by the footballing authorities.

Ballymena United Allstars are instead focusing on supporting their players – both Junior and Senior in this lockdown period.

Youth Academy Director Daniel Carlisle has provided all junior players with information on home training sessions and links to other useful resources to help the players keep playing the game, supporting their development even now.

And for the Senior players – team morale is the order of the day!

Zoom calls and What’s App are keeping the players in touch with each other and with the coaches.

Guardian Sport has even been reliably informed that there was a virtual Club quiz recently, bringing together players, parents, coaches and volunteers for a bit of fun and a good night’s craic, all organised by senior team coach, Ciaran Duffy.

The Club is also continuing to support its players still working on the frontline.

And Reserve team defender Samantha Boyd is a student nurse who, having finished her second year at Ulster University early, is continuing her studies while working shifts in Antrim Area Hospital.

The Club is rightly proud of these players and all of the members doing their part in helping all to come through the public health crisis.

No-one quite knows when the players will be able to get back to the game they love.

But what is for sure is that the all the Allstars teams will be ready and raring to go and that famous Sky Blue spirit will still be intact – as strong as ever!