UEFA European U-19 Championships are postponed 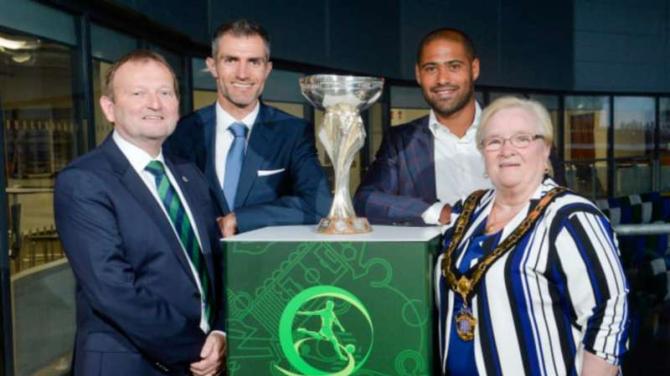 THE UEFA European Under-19 football Championships, which were to have been staged in Northern Ireland, have been postponed!

Mid and East Antrim Council have confirmed that the competition, which would have been using Ballymena Showgrounds as one of the venues, is off.

Back at the end of August last year Guardian Sport reported that the UEFA European U-19s were coming to the Province.

We reported that as well as Ballymena Showgrounds being used, venues in Belfast, Lurgan and Portadown were also in the mix.

The eight-team UEFA tournament was to have been staged from July 19 to August 1 2020.

At the time of the launch Mid and East Antrim Council Deputy Mayor, Councillor Beth Adger, said she was delighted to welcome another prestigious event to the Borough..

“Events like these offer a welcome boost across Mid and East Antrim as visitors can enjoy our wonderful hospitality alongside our world-class sporting venues,” she said.

Rising stars of European football were set to play at the event which was to have featured up to 16 matches over 14 days.

The venues for the games would have been Ballymena Showgrounds, the National Football Stadium at Windsor Park in Belfast, Lurgan’s Mourneview Park and Shamrock Park in Portadown.

Tournament Director Peter Gilpin said they were confident of delivering a successful U19 Euros that would have long-lasting benefits for football right across Northern Ireland.

All was going according to plan until the Covid-19 pandemic struck.