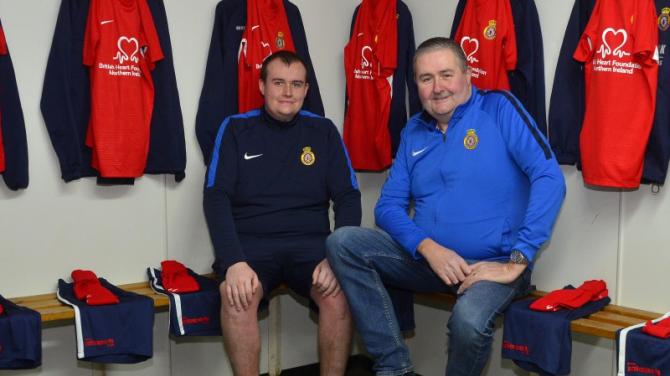 IF there is a definition of the 'one club man' then genial giant Davy Craig fits the bill perfectly.

In local junior football, he's well known for being at the heart of Raceview FC for 40-odd years through the good times and the bad.

"I've been kit man, driver, secretary, knocker-upper and treasurer down through the years and I've enjoyed almost every minute of it," laughs Davy.

And now the big man is handing over the 'logistical role' to son Mark as Raceview play on into a brand new decade.

Guardian editor Des Blackadder recently enjoyed a chat with Davy about his wealth of experiences with Raceview over the years.

Davy Craig probably put more effort into passing his driving test than any examination he took at school.

Born on a small farm at Ballygarvey, he, like most 'country boys', was desperate to get mobile as soon as possible.

"When I was young I spent most of my time in and around the farm," recalls Davy. "I went to Kirkinriola Primary School before moving to Dunclug Secondary."

Outside school there was limited scope for social activities.

"In those days, and it really wasn't that long ago, you had BB on a Friday night and St. Patrick's Youth Club on a Saturday night. We were easy amused. football, pool and darts - no facebook or twitter in those days," he laughs.

So when the big man passed his test first time at the tender age of 17 he felt on top of the world.

"It wasn't like living in the town or even Broughshane - living out in the country meant you had to scrounge a lift or get on your bike to get anywhere, so getting a car was a top priority in terms of independence."

Gathering up money for the car involved long hours manning the pumps at Crawford Harkness Filling Station. Later Davy would spend the vast majority of his working life in the Cigarette Factory at Gallahers.

"Around that time I was knocking about with Clifford Marcus. He could play a bit and when he went to Raceview - which was essentially the village team for folk in the Broughshane area - I went along to see him play. And that's how it all started.

"At the start it was just a matter of standing down the line watching Raceview's Saturday Morning team. There was always a good bit of banter and pretty soon I became mates with other players and supporters. When you get involved with anything at a grass roots level and if you get the taste for it, it's only a matter of time before it becomes an important part of your life," says Davy.

"Ian Boal was in charge of the morning team at the time and he asked me to help out behind the scenes. Running a club takes time and energy and in those days before mobile phones and e-mail it also required steady organisation. "

And sometimes the 'organisational skills' required the club's backroom staff to do a tour of pubs on a Friday night to make sure players were in their beds early for the next morning's game.

"Looking back you have to laugh," smiles Davy. "We had loads of characters at Raceview and I'm pretty sure some of those boys managed to' juke' us when we were on patrol."

Having a car meant that Davy became expert in cramming in as many players as possible for trips around the country.

"It wasn't so bad when you were just doing a local run but we had some fun jamming boys in for some of the longer journeys. Strangely enough I can never remember any real fall-outs. If you were involved with Raceview the football just became the major factor in your life.

"It was - and for some people still is - a 7-day a week, full time 'hobby'!" he says. "Back then you'd start on a Saturday morning with a game then another match with the senior team in the afternoon. Of course there was a bit of 'social activity' in the evening but on the Sunday you had to compile the match report for the papers.

"On a Monday night there could well be some league committee meetings and on Tuesday you'd be down at training. Wednesday night could be taken up with a 5-a-side tournament and you'd be training again on the Thursday.

"And of course, the Friday night pub patrol took you right back to the start again."

Putting nostalgia to one side, Davy is adamant that the running of a club was much more dependent on face to face relationships in those days.

"You just couldn't get someone at the drop of a hat or leave them a text message. You had to have meetings where people could have their say and go through all the scenarios. There was less room for misunderstandings. People took time to speak to each other and that built up a great sense of camaraderie," he says.

Davy uses an example from outside the football sphere to illustrate his point.

"I'm in the Orange and a few weeks ago I was out at an installation of officers. It was only when I was driving in home that I realised the difference between an Installation of 30 or 40 years ago and today!

"I looked at the clock and it was just before 10.30pm - back in the day the ganching wouldn't even have started at that time! I can remember being at functions and them still going after 1am. It probably is due to the fact that people are in almost constant contact via their social media nowadays. Back then - and I keep stressing it was not that long ago - you didn't meet up all that often so the average meeting whether it was an Orange 'do' or a football event could turn into a yarning session.

"The plus side of that was that you got to know people really well - it wasn't just a profile picture on facebook," he says.

While players and managers may come and go, there is one thing about football which remains eternal - somebody has to wash the kit!

And all-round clubman Davy has happily performed that task for team after team at Raceview.

“Well, I’ve only had to wash it in an emergency a few times,” he admits. “We’ve been using a local cleaner for years now and always get a great service.

“On the very few occasions when they couldn’t take on the job I’ve brought it home.”

So, does the wife give him a hand?

“Not a chance,” laughs Davy. “Norma made it quite clear that was my job from the start.”

While the actual playing kit goes to a professional cleaner, Davy still looks after the various training bibs and tops on his own, with a lot more help from son Mark.

“It’s part and parcel of being at the club,” he says. “When you’ve been involved for as long as I have it isn’t a chore at all - it’s doing your bit for the team.”

Other roles Davy has taken on his broad shoulders down through the years include secretary.

“That’s a vital job,” says Davy. “You have to keep up with the paperwork and make sure every t is crossed and i is dotted. Otherwise you could find yourself turfed out of a competition,” he says.

Treasurer, which is Davy’s current office at the club is becoming an increasingly important task.

“When I started out with Raceview the ‘dues’ were £1 a week - now it’s £5 and every single penny is needed to keep a club going nowadays with insurance, pitch hire,buses and all the other expenses. I must pay a special tribute to Mr. Norman McBurney of McBurney transport on that front.

“He has been our main sponsor for many years now and only a few weeks ago I dug out all our former strips with his firm’s name on them for a picture. Without the help received from Mr. McBurney the club would be a much poorer place,” he admits.

Having devoted most weekends in his life to Raceview for 20 odd years, Davy took a break in 1994 following the death of his father.

“That was a tough time and I was building a new home for my mother and I so I just couldn’t devote the same time to the club,” he says.

But he never really ‘kicked the habit’ and with wife Norma and newborn son Mark he moved into Broughshane in 1997.

By 2002, Davy was back in the Raceview saddle and he’s been there ever since.

However, it is son Mark who has taken on the kitman role having learned all the tips and tricks from the master. Or has he?

“Sure you try and tell them something but they have to learn by themselves,” laughs Davy.

“He’s doing a great job and if he could make a career out the backroom role I think he’d be up for it - but professional opportunities like that rarely come along.”

So, before the fat lady sings, I had to ask Davy for some highlights of his time at Raceview.

“No doubt about that,” he says. “Beating Downpatrick Hospital in the Junior Shield Final at Seaview in 2002. We’d beaten West Belfast on pens at Carrick in the semi-final so it was no easy route to the trophy.

“Gary Robinson and John McClean scored. There was some party after that! Winning the Junior Shield was a really great feeling - and it almost made up for losing to Castletown in the semi-final at Ballyclare in the mid-90s.”

And who was the stand out player over the years at Raceview in Davy’s eyes?

“For me it has to be Ian Millar. He was left side midfield - for junior level he was truly outstanding. He had fantastic ability but he was a great reader of the game. I think Ian would rate highly in anyone’s books,” he says. “Others who spring to mind would be Jackson Currie, Blair Jameson, William Hunter and from the older days John Millar. He was hard as nails but he could play!

Any hobbies away from Raceview?

“Well, I’m a fan of Leeds United. And I’d love to see them back in the top flight next season,” says Davy.

As the old saying goes .. you can take the football out of the man, but you can’t take the man out of football.