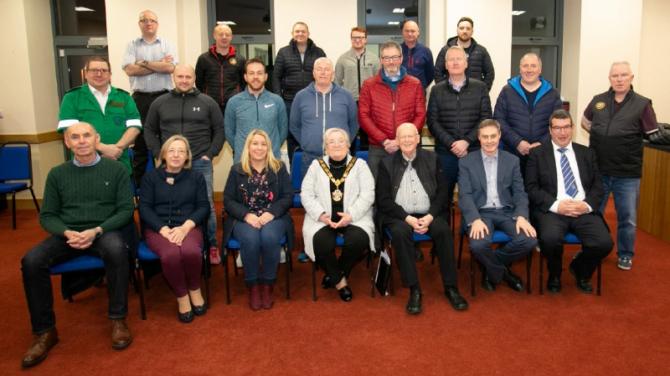 Last Saturday saw the return of the Harry Gregg Youth League up in Coleraine with the U9s 10s and 11s all eager to get playing again after the long winter break.

The U9s took on a strong Sion Swifts side while the U10 Youth and Amateur sides took on Portstewart and Ballymena Utd respectively with the U11 Amateurs up against Star Utd.

In the SBYL the U11 Youths enjoyed success against Linfield swifts with the U12s losing out to Carrick Rangers.

The U13 crossed their league success over to the cup when they dispatched Glentoran Black after a penalty shoot out.

Although the weather was not kind on Saturday morning it didn't seem to deter the 'Carniny Kids' who carried on regardless through the patches of rain.

All of the kids looked well in their new training kits for those who especially were able to make use of the wet weather wear.

The centre is now fully subscribed and it will be advertised if and when vacancies arise in the near future.

The centre continues this Saturday once again at its St Louis base at 11am and will continue for the next nine weeks. Some of the kids are being introduced to FUTSAL which is something kids at the centre get the opportunity to try as part of the IFA programme.

Carniny U9 Youths had another tough game in Coleraine against Sion Swifts.

As always the boys gave 100 per cent effort but were beaten by a good side. Robbie Greer had a good game in goals. John Bell and Ryan Mui were terrific again at the back.

Harry McKeown, Ethan Cherry and Jake McCosh battled hard in midfield with Luke Murray scoring from close range.Thanks to the mums and dads who travelled down to support us.

In bad weather conditions at Coleraine University Carniny took the lead in the first half with a good counter attack from the opposition corner.

Just before half time they were brought level after a scramble in the box resulted in the equaliser and then at the start of the second half they found themselves behind.

Unfortunately even though they hit the bar and had two cleared off the line they were unable to get the goal they deserved on this occasion.

Carniny took on Ballymena in this first game back in the HGFYL.

It was Ballymena who started the game well and went one nil up with a good finish.

This spurred the wee reds on and a nice team move resulted in the equaliser.

Carniny then started putting on the pressure and went in front when the Ballymena keeper pulled off a good save but the Carniny winger followed in and tapped home.

The lads kept going and got their rewards with a third before Ballymena got one back to make it 3 2 at half time.

Second half was a battle with both teams battling hard but the only goal of the half came from Carniny after a good run down the left resulted in the ball being played across the box and a fine finish settled the game.

U11 Amateurs enjoyed their first game back at the Harry Gregg League with a good overall team performance against Star Utd and a win. Goals from Lorimer, Barr and McHenry on his debut!

Carniny AYFC U11s put in a great team effort on Friday night against a Linfield Swifts side in the South Belfast Youth League. With a single headed goal from McCrickard deciding the game.

Carrick took the lead with a couple mins of the game gone.

Carniny then pulled one back to make it 1-1. Carniny were playing the better football but it was Carrick who scored again.

Carrick then scored straight from a corner to make it 3-1.

Carniny were pushing and pushing for a goal and eventuall got their rewards after slotting home to make it 3-2 to Carrick.

The Carrick keeper was in top form saving nearly every shot that came his way.

But as Carniny kept searching for the equaliser they were caught out on the break handing the game to Carrick,Goals from Andrews and Beatty

The U13s had a break from their high flying league campaign when they faced Glentoran in the cup at a cold and very windy Grove in North Belfast.

As expected this was a hard physical match against the Glens but the wee reds played some good football and created a few chances before Charly Gregg scored for a half time lead.

The Glens came back strong with wind advantage but Carniny held firm until 15mins from the end when a corner kick got caught in the wind and looped in to make it 1-1.

As the Reds pushed forward for a winner they created a couple more chances and a penalty claim was not given.

Final score 1-1 and the dreaded penalty shootout. Fortunately Carniny held their nerve to win on Penalties and keep their winning run intact.

The popular event organised by the Irish Football Association will resume on the 21st/22nd February, 2020 at Ballymena Showgrounds although prior to that the IFA FUTSAL programme will take place at Ballymena North Centre and Wellington Church commencing on the 11th January with the 2012 age group.