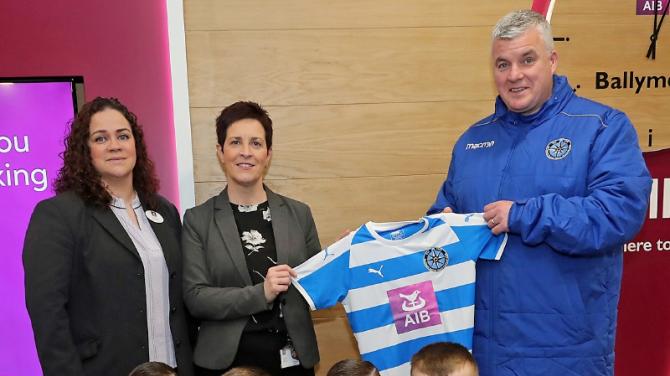 It was Cup weekend for a number of the Northend teams, with again some good results for the Club’s sides. Performance of the week goes to the Macaulay Wray sponsored U13s in their excellent five star performance win over Lisburn Rangers, hitting them with five goals in the Daily Mirror Lisburn Junior League. On target for the Northend boys was Peter Finnegan with a personnel best of four goals and Finn Connon with the other goal

It was also a good weekend for Jamie Pirie’s U14s, beating Lurgan Town 5-4 to maintain their position at the top of the Lisburn Junior League. Mark Crawford’s U11s are also into the hat for the next round of the Cup, winning on a penalty shoot-out against Irish league Championship side, Loughgall, after finishing normal time all square at 1-1.

Elsewhere, in the Mid Ulster League, the U17s are also into the hat for the next round of the Cup after a good 4-1 win over Ballymoney Youth, while the U16s lost by a solidary goal against Lurgan Town, in the League

Elsewhere, the U9s and U10s were back in action in the Harry Gregg Foundation small sided games at Coleraine University, after their mid-season break. The U9s were especially delighted, coming from two goals down to beat Maiden City in an exciting end to the match.

The U11s began their League Cup campaign against Loughgall on Saturday in blustery conditions in Lisburn. Against the wind, Northend started the game confidently and took the lead after 5 minutes. A free kick from Jude Crawford eluded the goalkeeper and found the bottom corner of the net. Both teams were showing great skill in being able to pass the ball on the ground in a swirling wind. In an evenly contested first half Loughgall equalised shortly before half time following a good passing move. Half time 1-1

Wind assisted in the second half the young Ballymena side enjoyed a lot of possession. Both defences were playing well however and clear cut chances were limited. Carter Adams, Adrian Pekala and Caleb da Prato at the back for Northend were giving nothing away.

The match finished 1-1 and went straight to penalty kicks. Northend came out on top with goalkeeper Alex Crawford saving a Loughgall penalty in the first five kicks and another in sudden death. Daniel McErlean who had a man-of-the-match performance in midfield rolled home the decisive penalty. Northend move into the next round after a superb performance by the whole squad.

A blustery Wallace Park was the venue for the Blues venture into the LJIL Cup. The game opened brightly with both teams having early chances the Blues going closest with a Kaczmarek effort cleared off the line. Bankhead was alert to the danger of a long through ball racing from his penalty area to clear. Maguire and McKay were connecting well playing simple but effective football to create space for Finnegan and O'Donnell to drive forward.

On 8 minutes an excellent ball from Finnegan found Connon down the left his early ball to Kaczmarek the striker rounded the keeper and squared to Connon who fired home the opener. The Blues were now playing with a confidence on the ball, Finnegan added a second when he made space in the box to score low in the corner. Good work from O'Donnell down the right his cross finding Kaczmarek his first time effort was well saved but Finnegan was on hand to grab his second. Half time 3-0The second half gave the management team an opportunity to give playing time to the panel. The changes did not deter the effort from the blues, and an early goal from Finnegan effectively killed the game off. On a rare venture forward from the Lisburn boys Matchett saved brilliantly at the feet of their striker. With 15 minutes gone, Nellins was upended and Finnegan found the net from the free-kick to round off an excellent personal performance. The Blues played some flowing football throughout this game and a late long range effort from Lisburn didn't take the gloss off the performance. The defence of Greer, Smyth, McFadden and Maguire were solid; McKay was composed at CDM and linked play well with the midfield where Finnegan and O'Donnell were excellent. In the plethora of changes McIlhatton, Nellins, Campbell and Maka delivered solid displays. Full time 5-1

Northend United U14s continued their league campaign with a wind affected match against fierce rivals Lurgan Town at Wallace Park. The Northend boys, missing several regulars, playing with the benefit of the strong wind in the first half took the game to Lurgan Town. The Ballymena boys went deservedly in front early doors courtesy of Kurtis Adger. However, the much fancied Lurgan Town attack was keeping the Northend defence on their toes and they deservedly equalised mid-way through the half. Northend however were playing with confidence with Adger and Paidin Mitchell in particular causing the Lurgan defence all sorts of problems. It came as no surprise when Mitchell struck twice with confident finishes to leave Northend two goals to the good at half time. Half time 3-1

Playing with the strong wind it came as no surprise when Lurgan Town came out to attack. The Northend defence, well marshalled by Conor Wilson were under extreme pressure and despite a brave rear-guard action conceded two well taken goals to level the scores at 3:3. The game was very even at this stage with both sides struggling to adapt to the elements but showing a willingness to attack on all opportunities. It was to be Lurgan who would score next to lead for the first time. However, this Northend team do not know when they are beaten and the introduction of Erik Hejno and Caelyn Clarke from the bench was to prove decisive when Clarke's speculative shot beat the Lurgan keeper to level the scores. Not content with the draw, Northend pushed for a winner which duly arrived late in the game when Clarke powered his way to the bye line before crossing for Adger to bundle home his second goal to seal an unlikely but well deserved win. Man of the Match was Conor Wilson for a calm and commanding performance at the heart of the Northend defence against a strong Lurgan attack. Full time 5-4

Man of the Match: Conor Wilson

A strong breeze at Wallace Park made playing conditions very difficult for both sides in this game and as a result there were very few goal-scoring opportunities at either end. The Ballymena boys had the wind at their backs in the first half but couldn’t turn that to their advantage. The Blues came close after seven minutes when Kai Barr cut a dangerous ball across the six yard box but no Northend player could prod the loose ball into the goal, moments later Lewis Hector forced the Lurgan keeper into a good save with long range effort. Lurgan benefited from a slice of luck at the mid-point of the half when a corner kick was headed towards Northend’s goal and found its way into the net after taking two wicked deflections. The Blues almost equalised before half-time when a well worked set piece saw Connor McKenna’s shot skim of the top of the cross-bar. Half-time 1-0

The Ballymena boys tried to keep the ball on the ground as they played into a stiff breeze in the second half and some resolute defending reduced Lurgan to a handful of chances. Sam McDowell made a smart one-handed save after ten minutes and had a good game in goal looking assured throughout. Around the fifteen minute mark, Conn McCann was pulled to the ground when through on goal and what looked to be a strong claim for a penalty was waved on. Peter Bristow made his return to the Northend line-up for the final twenty minutes after a four year sabbatical to play rugby and made a good impression. With little between the two sides it was always going to be a nail-biting end to the game and with five minutes remaining Tyrone Mitchell split the Lurgan defence with a pass to Owen Campbell, the young striker burst through on goal and saw his effort brilliantly saved by the Lurgan keeper. The Blues applied increasing pressure in the final stages but just couldn’t find that one clear chance to take something from the game. Full-time 1-0

Man of the match: Sam McDowell – With a blustering wind making this a really difficult day for any goalkeeper, Sam demonstrated some great handling and displayed confidence throughout.

Northend started on the front foot in this match with Matty Las and Adam Steele going close in the early stages. With Telford and Millar pulling the strings in midfield, Northend always looked dangerous.

However, Ballymoney weathered the early Northend pressure and came more into the game. Alex Blair and Jamie Montgomery were on top of their game to keep the Ballymoney strikers at bay in a frantic 15 minute spell for the Ballymena Boys.

Midway through the half, a great throughball from Ferris found Matty Las free of his marker and the Northend striker coolly lobbed the Ballymoney keeper for Northend’s first goal.

The Blues were now playing some good football through the midfield but a defensive mistake allowed the Ballymoney striker to pull them level, when he slipped the ball past a stranded Northend goalkeeper.

With Patrick Ferris prominent in the Northend midfield, Northend took the lead 5 minutes before half time, when a jinxing Ferris run ended up with a cross to the Ballymoney back post, when Las was hovering to score Northend’s second gaol. Half time 2-0

Into the second half and with Connor McAuley introduced, it was Northend who were again on the front foot. Telford went close for the Blues with a well struck shot from the edge of the box. With Ferris causing the Ballymoney defence all sorts of problems with his penetrating runs, Adam Steele connected with a Ferris cross into the Ballymoney box, to extend Northend’s lead.

Midway through the half, following a series of corners, Connor McAuley steered the ball past the Ballymoney keeper to take Northend’s tally to 4.

Las went lose again, when he turned his marker in the box, but the Ballymoney keeper made a good save from Las’ shot.

Jack McIlhatton thought he had given Northend a fifth goal when he skipped past two markers and rolled the ball across the face of the Ballymoney net, only to see two Northend strikers seem grounded to the spot, and the chance went a begging. Full time 4-1

Player of the Match: Team Performance

The Club would like to go on record to thank Allied Irish Banks CEO, Colin Hunt, for sponsorship of a new playing kit for Northend 2011 team

The Club are holding a Golf fundraising day at Ballymena Golf Club on Sunday 29th March. Some Tee times are still available. Contact Alex McDonald on 0774 2239 674