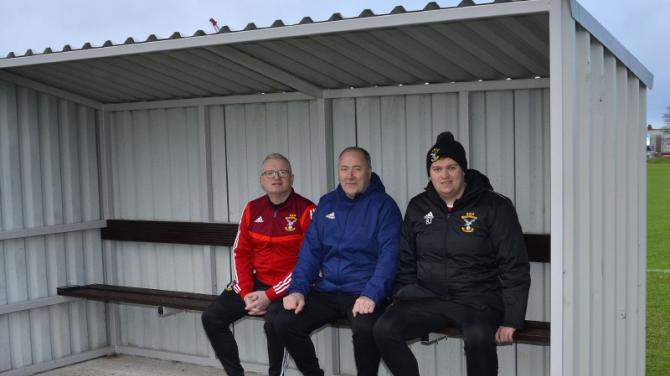 COUNCILLOR Rodney Quigley has thanked Council for providing dugouts for the football teams playing at Wakehurst.

Top Saturday Morning League side Harryville Homers approached the Councillor shortly after was elected asking if permanent dugouts could be acquired for the four pitches.

This week comes the news that the dugouts have been installed at the pitch used by Homers.

Cllr. Quigley said he and Homers are delighted.

He outlined that after arranging a meeting with Mid and East Antrim Council officials it was agreed that two dugouts would be placed on one pitch as a trail - and if successful the plan could be rolled out on the other three pitches over a period of time.

Work on the foundations began in late November and the following month the placement of the first set of dugouts was completed.

“It's great to see that after over fifty years of football being played in the Harryville area we finally have dugouts for the teams who use the pitches,” said Cllr. Quigley.

“For many years team officials and players have stood on the touchline in all kinds of weather with no shelter so it's great to finally have a dugout for them to sit in during the game.”

He thanked Council for their response to the needs of the football teams who are based in the Ballymena South area.

“I look forward to working with the teams in the future to help make sure that Wakehurst Playing Fields have the best facilities available,” said Cllr. Quigley.

The Council owned Wakehurst Playing Fields have been at the centre of local junior football for well over 50 years.

Some of the best and most successful teams in junior football have made it their home over this time.

Harryville Homers, the first club to avail of the new dugouts, thanked Cllr. Quigley and Council for providing the excellent new facilities.