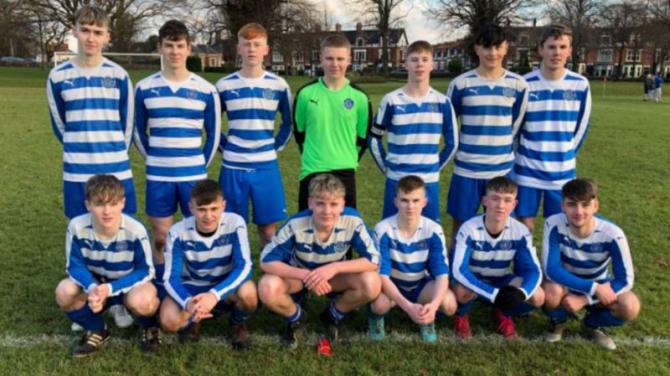 Another top week with some outstanding results for the Northend sides.

Undoubtly performance of the week going to the U17s in their excellent 4-3 penalty shoot-out win over a much older looking Willowbank side in the last-16 of the prestigious NIBFA Cup. Matty Las pulled the Northend boys level before the end of the game and went on to score the all-important penalty to seal a good win.

The Nuprint sponsored U16s were also enjoying Cup football at the weekend in their match with Tullyvallen Rangers, in the Mid-Ulster Cup. Debutant Ethan McCormac scored the all-important goal to pull the Northend boys level, before Tyrone Mitchell and Owen Campbell sealed an emphatic win in extra time.

Northend U11s United continued their recent good form, this time drawing with one of the top teams in this league, Lisdrum Youth,

Paidin Mitchell with two well taken strikes and Adger with his second, scored again in the first half to effectively kill the game off as a contest. Half time 4-1

. It came as no surprise when Kurtis Adger completed his hat-trick, scoring for the 29th time in a remarkable season.

With Northend threatening all over the pitch, Conan McKeown stepped up from left back to beat the keeper at his near post to make it 6-1. After being introduced from the bench, Caelyn Clarke was causing the Hillsborough defence all sorts of problems and was rewarded with a goal, his team's seventh. Hillsborough never gave up and were rewarded with a second consolation goal. However it would be Northend who would have the final say and with virtually the last kick of the ball, Oliver Stinson scored an eighth.

Men of the Match: Lewis Devlin and Daniel Patterson.

The blues were playing for a place in the quarter finals.

Sam McDowell made a smart save to push a shot onto the cross bar after ten minutes. From the resulting corner Tullyvallen took the lead,

As the game entered its final stages the blues pushed further men forward in search of an equaliser.

Ethan McCormac made his debut for the club, and what a debut it was, as he fired home a loose ball in the Tullyvallen box to push the game into extra-time. Full-time 1-1

Extra time: The Ballymena side made a decisive break through in the third minute when Lewis Hector split the Tullyvallen defence with a pass for Tyrone Mitchell, the young midfielder coolly rounded the keeper and edged the blues in-front.

The blues put the game beyond doubt in the second minute of second period of extra time when a good passing move saw Owen Campbell outpace his marker to drill home a low effort for the winner and in doing so booked the blues their slot in the quarter finals. AET 1-3

Men of the match: Team Performance.

Willowbank took the lead midway through the first half.

The Blues eventually went on to win the match, following a penalty shoot-out with Joel Telford, Ross Steele, Patrick Ferris, Adam Steele and Matty Las, the penalty takers for the Blues

Man of the Match: Jamie Montgomery

St. James went in at half time a goal in front.

In the second half substitute Charlie O’Neill volleyed home from a Matthew Stewart corner - 1-1.

Jack Agnew stepped up and blasted home a pen alty to put Northend ahead. But Swifts equalised.