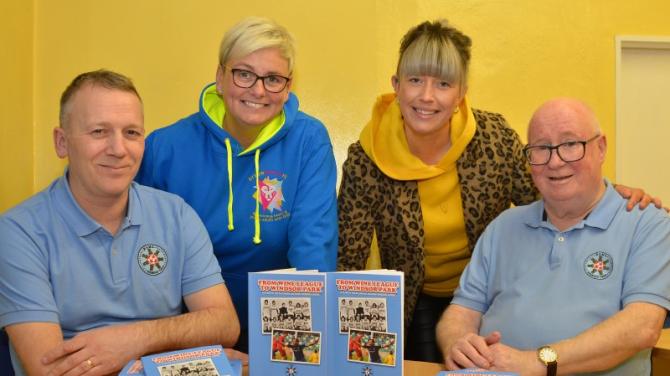 "From Wine League to Windsor Park...50 Years of the Ballymena Saturday Morning League" - the brand new book which tells the remarkable grass roots story of local football is now on sale.

The book - compiled by Johnny Doak - traces the progression of the Saturday Morning League from when it began in 1969 with just six teams through to the present day.

Included at the beginning is an overview of Ballymena back in 1969 which details many aspects of life in the town from a political, social and sporting perspective.

The football tale begins with contributions from some of those who were involved right at the start, both players and administrators. As the story moves on through the 1970s and 1980s, the growth of the league to forty plus teams over three divisions is covered.

Stories from some of the teams based in villages around the town are covered as well as the success of clubs in national competitions with ex-players sharing their memories of glory days.

Alongside stories of success are the tales of teams who play in the lower levels of the league and what motivates them to keep going.

In the league's earliest days, there were some who were quick to write off the new footballing venture. But in recent years, the pinnacle of junior football in Northern Ireland was reached when Harryville Homers won the IFA Junior Cup on three occasions. The last of these took place in a final at the National Stadium at Windsor Park. The story of that success is covered in detail with insight from both the team manager and captain.

Of course no story of the Saturday Morning League would be complete without the man who makes it happen. Brian Montgomery, known to all as Monte, has been involved since day one and his story can also be found within the pages.

The book is currently on sale at The Picture Box in the Tower Centre and at The Kiosk at Ballymena Train Station. All proceeds from the book will be used to support the work of Bravehearts NI and The Turning Point NI.