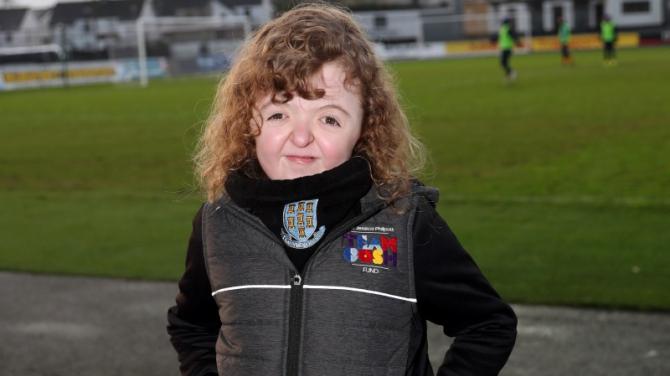 The 11-year-old, from Ballymena, was at Saturday’s disappointing 3-0 Premiership home defeat by Glenavon.

But she believes the Sky Blues can turn it around and lift morale with a Shield success over Cliftonville this evening.

In a letter, sent to Guardian Sport, Moorfields Primary School pupil Jessica wished Ballymena boss Jeffrey and his side the very best.

The letter reads - Dear David and all at BUFC I want to take this opportunity to wish you and the team all the very best in the County Antrim Shield final.

I know that you can beat Cliftonville and bring the trophy home to Ballymena.

Last month Jessica and her mum and dad Julie and Lawrence attended the Ballymena United Carol Service in the Des Allen Suite after which Jessica had her dream come true by getting to meet United manager David Jeffrey.

But it was boss man Jeffrey who said afterwards that it had been “an absolute privilege to have met Jessica.”

The Ballymena girl, who was born with 'Apert Syndrome', a condition that falls under a rare craniofacial umbrella, is the most operated on child in the United Kingdom.

Jessica has had 70 operations in Great Ormond Street Hospital in London.

But for her last month Christmas came early when she was able to fulfil a long time dream - meeting David Jeffrey.

But it was Jeffrey who was totally knocked back when he talked at length to Jessica, and her parents

After being part of the annual Ballymena United Carol Service Jeffrey invited Jessica, Julie and Lawrence into his office for a chat - and then gave Jessica a conducted tour of the changing rooms and Players’ Lounge, introducing her to his staff and some of the players.

“Here is a young woman who is immensely courageous and has such a desire to make things better, not just for herself, but for others,” Jeffrey said at the time.

And the manager gave Jessica a free invite into the Showgrounds set-up at home games.

“She will not be a stranger here. Her family are Ballymena United through and through which I am delighted to say,” outlined Jeffrey.

Later this year Jessica’s next surgery will be her mid face advancement surgery.

Mum Julie confessed this is one the family have been particularly dreading.

“It’s a risky, complicated and a long process. Essentially, Jessica will have a distraction device called a Red Frame that looks like fancy headgear with pins inserted at various points on her facial bones, and these pins will be turned every day,” outlined Julie.

She recently presented a £1,500 cheque to GOSH.

Jessica is actually a registered GOSH fund raiser, the only one in Northern Ireland!