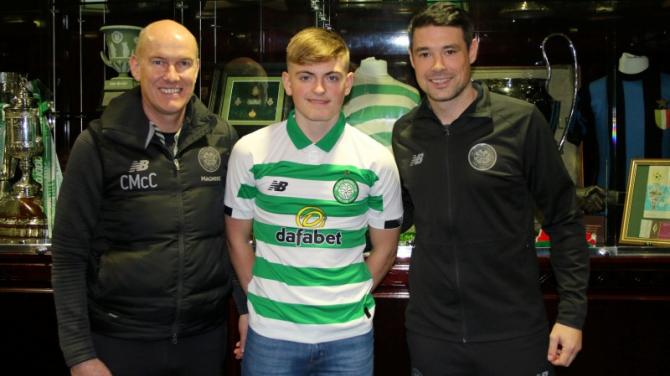 The 17-year-old, from Ballymena, put pen to paper last week at the Parkhead club.

Proud dad and mum, Keith and Andrea, were present.

“We are both immensely proud and delighted for Ben,” summed up Keith, a former player with Ballymena United.

Back in June 2016 Guardian Sport exclusively revealed that Ben had agreed a deal with Celtic.

This week comes the exclusive news that a new three year contract has been agreed.

“They have made him into a much better player and he is improving all the time.”

Ben, who also plays for Northern Ireland Under-19s, operates as a holding midfielder.

He was over home a few days at Christmas, before being called back on Boxing Day by Celtic Academy.

This afternoon (Tuesday) Ben will be in action with Celtic Reserves against Chelsea Under-23s in London.

The future certainly looks bright for the talented teen.

Back in the Summer of 2016 we reported that Ben had signed a three year professional deal with Celtic.

At the time the former Dunclug College pupil said it was “a dream come true” and he was pleased everything had been sorted out.

Ben took his studies to Scotland where he attended St. Ninian’s High, just a stone’s throw from Parkhead, studying for his ‘A’ levels.

Teams, including Rangers, Crystal Palace, Stoke, West Brom and Watford were all chasing the teeanger’s signature.

Back in March a few years ago Ben was named ‘Junior Sportsperson of the Year’ Mid and East Antrim Council Sports Awards evening in Carrickfergus.

He was on his way back from Belgium with the Northern Ireland Under-16s and was unable to attend.

Andrea announced on stage as she collected the award that Ben was poised to sign pro - but would not reveal what club.