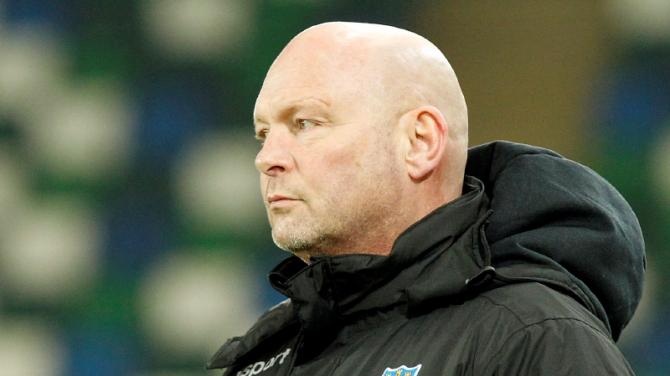 DAVID Jeffrey told his players to enjoy their semi-final Shield win over Harland and Wolff Welders - but then get focused on Saturday’s Premiership clash with Institute at Ballymena Showgrounds (3pm).

The Ballymena United boss was proud of his side’s showing on Wednesday night - their 4-0 win booking them a place in the County Antrim Shield final in January.

But Jeffrey is keen to get United’s League run back on track.

The Sky Blues, who finished runners-up last season in the Premiership, have not won in the League campaign since Saturday, September 28.

On that day they beat Cliftonville 1-0, with Jude Winchester on target.

But a lengthy list of injuries has caused United some grief this season. A player comes back, and another limps out.

It has been difficult for Ballymena and in recent weeks a number of youngsters have been drafted into the panel.

But on Wednesday night it was good to see Tony Kane and Reece Glendinning back on duty.

“Sean (Connor) has them well organised and working very hard,” said Jeffrey. “ It does not surprise me in any way, shape or form. Bottom line is while we enjoy getting through into the County Antrim Shield final, Saturday is vital for us. And we know we are going to have to be at our best. I do not know what bodies we have. We have to go out with a gritty determination, because Institute, by all accounts, even down to 10 men, against Linfield, were most impressive.”

Jeffrey said Institute have had some great results, recalling they went to Seaview and earned a draw.

The Ballymena boss said while they enjoyed the Shield semi win they “have to get on with the job of getting ourselves up that League table because this is a big period.”

He concluded - “We need to make sure we are giving of our best who ever the 11 players are.”

On Wednesday night United striker Adam Lecky, back from suspension, helped himself to a hat-trick. Shane McGinty got the other goal.

Ballymena United will meet Cliftonville in the final on Tuesday, January 21.