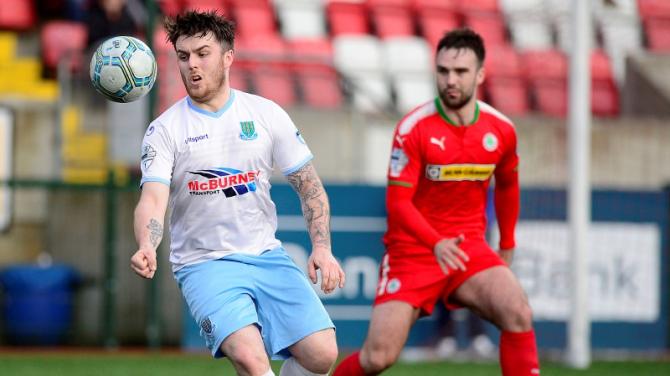 BALLYMENA United take on Dollingstown FC tonight (Tuesday) in the third round of the BetMcLean League Cup at The Showgrounds (7.45pm).

The Sky Blues will be keen to get back to winning ways following their disappointing 1-1 draw with lowly Institute at The Brandywell.

It took an equaliser from centre-half Johnny Addis to earn United a share of the points.

And their absence was evident at the weekend in Londonderry with Ballymena missing a series of clear cut chances.

Jeffrey will have put Saturday’s result in the bin - and turned his full attention to the visit of Dollingstown in the League Cup.

Ballymena drew them in the second round last season, and romped to a 5-1 victory.

Ballymena should have won against Institute, and early on should have gone in front on a couple of occasions.

Ryan Mayse missed a couple of chances and Declan Carville knows he should have did better with a free header.

In last week’s Guardian Sport United boss Jeffrey made it clear that any time his side came up against Institute they always encountered a difficult hurdle.

Saturday was no exception. But if Mayse had stuck away chances in the fourth and eighth minutes United would have coasting. If only .........

But a powerful header by Addis, from a Steven McCullough corner kick, levelled matters.

United boss Jeffrey knows his side created enough chances to have won the game.

He said ironically his side passed and kept the ball better than any other time this season.

“We created chances, but we did not win the game,” outlined Jeffrey.

“We created six very score-able chances in the first half, and in the second half we dominated possession but again didn’t take the opportunities that came our way and we were hit by the sucker blow when we came in at half time trailing.”

Jeffrey told his side to keep doing what they were doing - but not to be wasteful.

“We got a great goal from Jonathan Addis and I thought we would kick-on from there but despite our dominance and the amount of chances we created we couldn’t take one, which would have sealed victory,” he said.

* On Saturday Ballymena United meet Crusades in the League at the Showgrounds (3pm).

And on Tuesday, October 15, the Crues at back in Ballymena - this time in the second round of the Toals County Antrim Shield (7.45pm).

* If anyone lost a United bobble hat at The Brandywell on Saturday - contact Seven Towers Chairman Tommy Patterson (tonight) Tuesday at the Dollingstown game - or on Saturday!