All Saints are Champions! 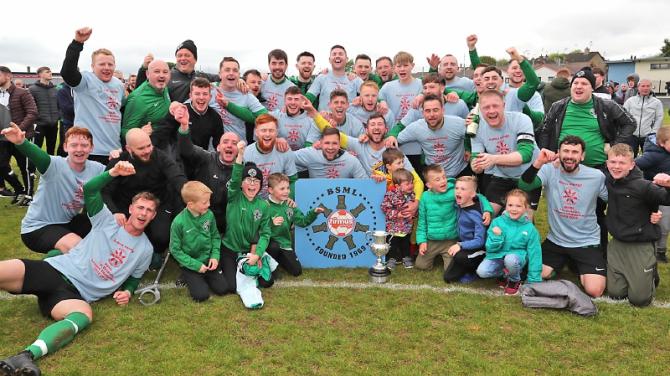 ALL Saints Old Boys are the newly crowned Division 1 champions!

At the weekend they took on title holders Harryville Homers in a winner takes all showdown.

Homers needed just a point to retain the championship.

But Old Boys had plans of their own and went on to beat Homers in their backyard to take the coveted crown.

Both teams went into this match with a chance of winning the league title - but a late double strike from Aaron Keenan sealled victory for the visitors and stopped Homers making it a magnificant seven title wins ina row.

For Old Boys it was their second BSML Division One title in their 20th year.

Homers got a dream start after two minutes when David Nicholl pounced on a loose ball and from 25 yards out curled a brilliant effort beyond Leon Bonnes to give Homers the lead.

Saints were rattled after this and Leon Bonnes came to their rescue when he saved from Paul McNeill.

On 18 minutes Saints drew level when Emmet Killough clipped a free kick into the box and Connell Lemon flicked the ball on for Ciaran McGarry who poked the ball past Alex McCosh making it 1-1.

And his ball across the box was turned into his own goal by a Saints defender.

Saints had two great chances before the break to levell.

Brian Paul Donnelly broke clear but on both occasions McCosh saved well to keep his side in front.

The second half saw Saints dominate possession without causing McCosh many problems in the early stages as the patched up Richard Reid and David Gibson kept Saints at bay.

Both sides were dealt injury blows with 25 minutes to go when Saints lost Kavan Keenan to a shoulder injury and Richard Reid finally succumbed to a shoulder problem.

The sides were then also both reduced to ten men within minutes of each other as the game looked to be going in the favour of Homers.

Saints gave themselves a lifeline with 10 minutes to go.

Substitute Aaron Keenan drilled home from 18 yards out beating McCosh at his near post to make it 2-2.

With the draw doing enough for Homers to clinch the title they sat in against Saints who threw everyone forward and with four minutes to go Saints got their reward with the fifth goal of the game.

Ryan Wilkinson sent a free kick into the box which was headed down by Ciaran McGarry and with a sweet left foot volley Keenan rocketed the ball into the top corner of the net and sent Saints into pandemonium.

There was almost a final twist in the final minute of injury time when McCosh almost came to Homers rescue when he headed wide at the back post and with it went Homers chance of an equaliser as Saints seen out the game to win the Division One title.

After the final whistle Andy Kerr BSML President on behalf of sponsors firmus energy presented the BSML League trophy to All Saints OB Club Captain Alan Telford and Captain on the day Donald Crawford as the title celebrations began.