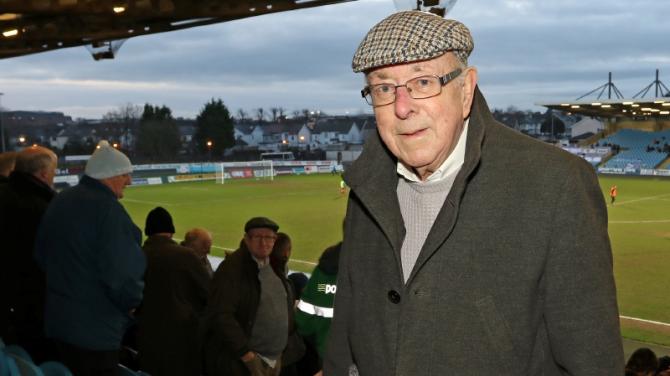 It is one which has seen the Sky Blues play their way into this Saturday’s BetMcLean League Cup final.

And loyal supporter Davy, who comes from Lettercreeve in the town, has nothing but praise for the man who has taken United this far.

And they came close to setting up another final place earlier in the season - the Toals County Antrim Shield - before bowing out 2-1 to Linfield in the semi at the Showgrounds.

In the meantime life-long United fan Davy, who will be 89 years old in July, looks forward to Ballymena v Linfield on Saturday at Windsor Park in the BetMcLean League Cup showdown (5.30pm).

Due to health issues Davy will be watching the final on Sky in the comfort of his Ballymena home.

“When I was younger I was able to travel to all United’s away games, but this is now not the case. I will enjoy the final on television and I wish David Jeffrey and Ballymena United a successful day out,” he said.

Davy does not expect an easy final for United.

“Linfield will be a tough challenge,” he said. “But if we play the way we can we can bring the Cup back to Ballymena.”

He said when the Sky Blues perform to their best they have the beating of any team in the Premiership.

There will be a massive United support making the trip to Windsor on Saturday.

As well as buses and cars travelling, the traditional Sky Blue Express train booked for Ballymena supporters will make the journey to Belfast.

Davy says he will miss the atmosphere of the final due to being at his home, but intends thoroughly enjoying the spectacle on tv. “I love getting to the home games,” he said. “It is great meeting up with friends. And I have some great ones I see on match days at the Showgrounds.”

Back in January last year United were in the BetMcLean League Cup final against Dungannon Swifts.

It turned out to be a day of disappointment, with United losing 3-1.But Jeffrey’s side plan to make amends this time round.