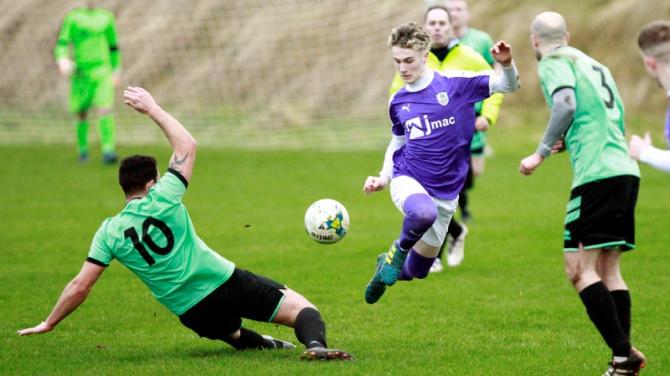 A brilliant second half performance saw Saints run out convincing winners against Ruby’s.

Both sides had chances in the early stages with Derek McMullan going close with a free kick for Ruby’s while at the other end Chris Wilkinson had a header cleared off the line.

The breakthrough came on 19 minutes when they kept alive a corner kick with Emmet Kerr releasing Barry Hamill on the left and he chipped the ball in for Donald Crawford to head home the opener.

Peter McReynolds then went close to make it 2-0 for Saints before Ruby’s had a good spell towards the end of the half with a William Magill free kick almost leading to an own goal but Saints seen the half out to lead 1-0 at the break.

Two minutes into the second half Saints made it 2-0 when Philip Lynn poked home at the back post after great trickery in the box from Emmet Kerr set him up.

Philip Lynn was the creator for the third when he drove down the right and drilled the ball across for Ronnie Marshall to score from close range 10 minutes later.

Substitutes John Cassidy and Stephen Sexton combined to make it 4-0.

The latter finished well after being slipped in by Cassidy with 25 to go and then seven minutes later Ronnie Marshall drilled home his second to make it 5-0 after John Cassidy saw his effort canon off the cross bar.

It was 6-0 minutes later when Barry Hamill finished off a great move when he latched onto a Conan Dunne flick to score with his right foot.

Ronnie Marshall completed his hat trick and made it 7-0 with eight minutes to go finishing with a great finish after good work from Conan Dunne set him up.

Ruby’s got a goal back when Jordan Bell fired home after a long ball from Craig Cowie beat the Saints defence. Saints had the final say though as Barry Hamill made it 8-1 showing great skill on the edge of the box before drilling home his second and capping a convincing win for Saints.

These two teams will be hoping to battle it out for a Top Four spot, and it was Raceview who stole a march on Southside with this win thanks to an Alan Jones hat trick.

Raceview started strong dominating possession getting in behind Southside on numerous occasions to no avail.

The home side got the breakthrough their play deserved on 21 minutes when Ryan Gregg broke down the left and his cross was missed by the Southside defence and Jones finished well with a one touch finish.

Jones was brought down for a spot kick soon after finding the net, but he could not find the net from the spot with Kyle Rowe diving full length to keep the score at 1-0.

Not taking their chances came back to hunt Raceview before the break when Southside captain Dylan Graham headed home the equaliser.

Just before half time he headed home a Jonny Logan free kick.

Raceview started the second half how they started the first and on the hour mark they regained the lead when Jones headed home a Jamie Craig free kick.

Southside were reduced to 10 men and this did their cause no good as Raceview dominated possession and added a third goal 15 minutes from time when Mark Taggart slipped in Jones and he made no mistake slotting home his hat trick goal.

Jones could have added more goals in the dying stage but Kyle Rowe in the Southside goal denied him on several occasions, but Raceview were not to be denied all three points.