FEEDER to light up the Limelight 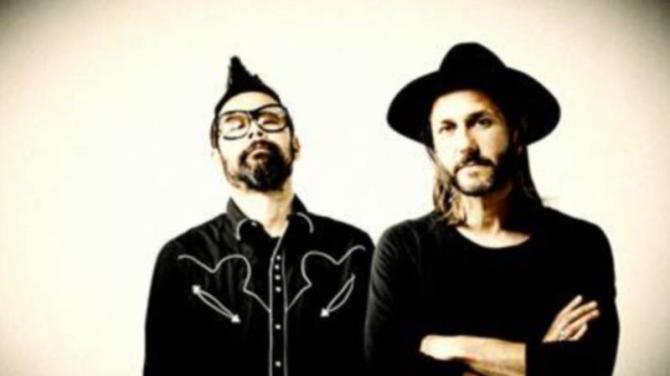 FOLLOWING the band’s seventh top 10 album in 2016 along with sold out shows and a rake of festival appearances, FEEDER (Grant Nicholas and Taka Hirose) have released their top hits collection ‘The Best Of’ and are touring this year.

They will return to Ireland with gigs set for Wednesday 21st March (Olympia Dublin) and Thursday 22nd March (Limelight Belfast).

The band will treat their fans to their many hits featured on their ‘Best of album’ at their forthcoming Olympia and Belfast gigs.

FEEDER’S recording career has spanned 21 years and spawned nine studio albums, nine compilations, 41 E.P.s and singles (which spent 181 weeks on the singles and album charts) and 20 top 40 singles. They have sold 5 million records, including 3 Platinum and 2 Gold Albums.

On top of all of this, the band have also released the single ‘Veins’ from the new album ‘Arrow’. The song is more topical than ever as Grant Nicholas croons “don’t live in ignorance, it’s time for change, something significant…. we have all this love to give”. Gig goers can expect all the greatest hits as well as fresh tracks from ‘Arrow’.

THIS year is an exciting year for Irish band ASLAN as 30 years ago they released their debut album 'FEEL NO SHAME' way back in 1988.

To celebrate the band have just announced a date for Belfast’s Mandela Hall on Saturday 14th April.

Aslan’s new single 'Now I Know' which was produced by Joe Jewell and Philip Magee (Kodaline, The Script) will be released in the coming weeks to coincide with the tour.

Tickets priced £20 go on sale this Thursday 1st February at 9am through www.ticketmaster.ie & usual outlets nationwide.

Wilko’s back in Ballyshannon

He graced the Rory Gallagher Festival in Ballyshannon a few years ago and now the Dr Feelgood ace Wilko Johnson is returning for this year's weekend which runs in the Co Donegal coastal town from 31st May - 3rd June.

Joining Wilko for one of the Festival's best line-ups yet are Wishbone Ash, Walter Trout, John Wilson's Taste, Brian Downey's Alive and Dangerous the Pat McManus Band and Johnny Gallagher & Boxtie, to name but a few.

Rory Gallagher International Tribute Festival 2018 takes place in the town where the world's greatest guitarist was born and attracts over 10,000 fans.

It will be a special four-day celebration remembering Rory Gallagher in this the year of his 70th Birthday.

This year marks the return of Oxford-based sludge-metal titans Desert Storm as they prepare to follow the release of 2014’s critically-acclaimed ‘Omniscient’ album with their new opus ‘Sentinels’, confirmed for release this coming March 16th via APF Records.