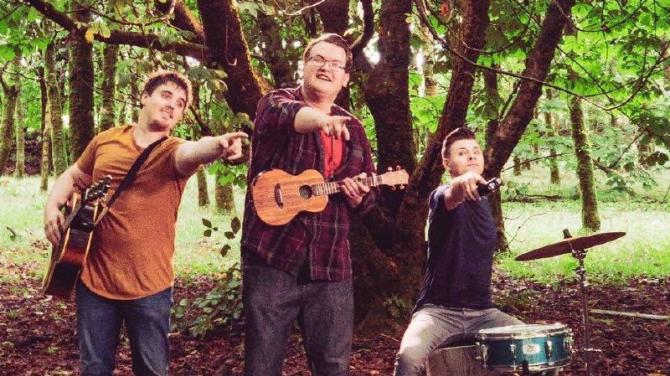 THREE-piece local band, ‘Crosshair Kid’, will perform at the Dalriada Festival in Glenarm on Sunday (July 14).

They are due on stage and set to entertail at 1pm.

Michael McCluskey, Andrew Johnston and Ricky Alexander will provide the music - and all cannot wait to perform in front of such a large audience.

“We’re all excited to be invited back to play.

“It’s our third year at Dalfest and it’s always a good day of food and music,” said Michael.

‘Crosshair Kid’ have been together for three years.

And the name? How did that ever come about?

“The name existed before the band did.

“It popped into Andrew’s head when he was procrastinating one day at Uni, and it stuck,” explained Michael.

“The meaning of the name has taken shape over time.

The Dalriada Festival puts the trio on a massive stage, much larger than they normally play on.

“Usually we entertain in cafes. Our most common haunt is Follow Coffee in town, but we’re starting to play more places now,” said Michael.

Performing at Dalriada Festival is pretty high up on their list of top venues.

The week after their seaside showing the three, who are all former pupils at Cambridge House School, will be playing at Beanstock in Lisburn.

After that they have a couple of weddings to play at, and other plans are in the pipeline.

“It’s going to be a fun summer,” summed up Michael.

Off stage Andrew works for WrightBus, Ricky in Smyths Toy Store and Michael in Zero Hour Studios in Coleraine.

I asked how would they describe the kind of music they perform.

“When we’re asked this we aren’t ever really sure how to answer,” replied Michael.

“So we decided to make up our own genre. We call it Easy Alternative, or Easy Alt for short.

“Music that’s easy to listen to but also a little different.”

For the record, when you attend their Dalriada Festival gig on Sunday, July 14, Michael plays guitar, Andrew plays ukulele and switches to guitar for some songs, while Ricky plays cajon and percussion.

“All three of us sing, though Andrew takes the lead,” concluded Michael.