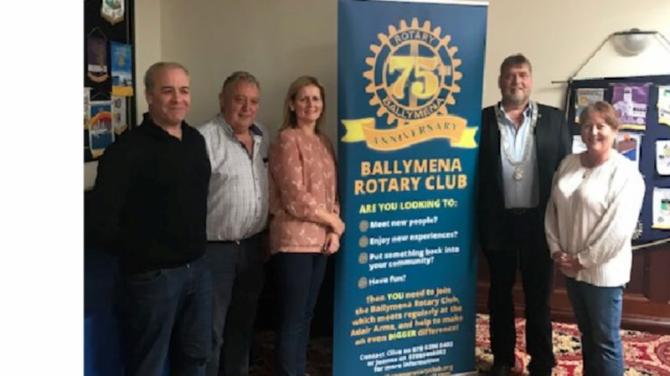 This and many other activities over the next few months will be used not only to highlight the anniversary but also to raise awareness of Ballymena Rotary Club.

Office Bearers for the Club’s 75th year are Clive Kyle President, Sam McLean Treasurer and Chris Still Secretary. Membership consists of 36 dedicated Men and Women with a large range of skills and experiences working together to give service to both Local Community and abroad.

The Club has been extremely busy this month and have been organising a number of events including - Rotary Young Artist Competition – entries are now all in and will be judged in the coming weeks.

This will result in an exhibition in the Braid next year.

This includes an application process followed by interviews with the young people.

75th Anniversary Talk – Tuesday 18th September - We are delighted that Past President James McKervill will be coming along to provide more information on the history of Ballymena Rotary Club.

Rotary Golf Day – Friday 21st September, 11am to 4pm at Galgorm Golf Club. This competition is open to anyone to come along.

Rotary Open Meeting – Tuesday 20th November we are having an informal meeting to which will be open for anyone to come along to hear more about Ballymena Rotary.

President Clive Kyle said he is delighted to be serving as President during this very special 75th Anniversary year.

“As well as looking back, Ballymena Rotary Club are determined to continue to grow and develop in the future and make a difference both locally and further afield,” he said

The Club’s inaugural meeting was on 27th September 1943 in the Clarence Hotel.

The Ballymena Club was the 8th Club to be founded in Ireland which now boasts 69 Clubs.

The history of Rotary in general goes back to the 23rd February 1905 when a Chicago Lawyer Paul P Harris called 3 friends to a meeting, his vision being to form a Club that would encourage fellowship amongst members of the business community, an idea originating from his desire to find the kind of friendly spirit he had known in the villages where he had grown up.

Little did the four businessmen know that they had created the first ever Rotary Club.

Word of the small club soon spread and other businessmen were invited to join. By the end of 1905 the Rotary Club of Chicago had 30 members.

By 1921 the organisation was represented in every continent and the name Rotary International (RI) was adopted in 1922.

Today there are some 32,000 clubs in over 200 countries and geographic regions across the World boasting 1.2 million members. In Great Britain and Ireland there are 1840 Clubs and over 55,000 members.

By combining their skills and resources Rotarians can make a real contribution to the lives of others.

Members volunteer their time to serving their local communities through activities such as: supporting community events, running projects to promote the achievements of young people, running educational programmes and supporting local businesses.

The above ideals and objectives are the principals that run through the Ballymena Club from its inception on 27th September 1943 to the present day.

We contribute generously to Rotary Foundation which funds the improvements of health, the support of education and the alleviation of poverty throughout the World. like the eradication of Polio and supplying shelter boxes to both man-made and natural disasters. For more information visit www.ribi.org/about-us/what-we-do

We have also worked directly with the Restart Children Centre in Gilgil Kenya which has taken orphan children off the city streets by supplying money for buildings and educational materials. The Cub’s latest donation was towards fitting out a nursery for babies.

We collect, restore and send bicycles via the Jole Rider Charity to Gambia for the sole use of secondary school children to enable them to attend school.

Locally they run a Young Artist of the Year for all of Northern Ireland with the help of extra sponsorship from Mid and East Antrim Council and Vision Express.

They run a technology challenge for 13- year olds in partnership with the North Regional College and sponsorship from local businesses, where 2 teams of 4 from each of the 9 local Secondary schools compete in a 1-day challenge.

The objective is to promotes the STEM subjects, Science Technology Engineering Mathematically at year 10.

Since 1992 they have run a Youth Leadership Scheme which helps 16 to 17-year olds to develop their interview and communication skills.

We started kids out day in 1990. Initially it was children from Loughan School but now 60 children from Castle Tower are taken to the Cinema and then lunch which was at Monroe’s this year.

For over 50 years they have been distributing food hampers at Christmas to the elderly, needy and lonely in our Community.

Last year was no exception with over 200 hampers.

Thanks go to the local primary and secondary schools for collecting the majority of food.

Rotary run various charity events throughout the year to help raise funds. These include a Golf Day at Galgorm, table quizzes, raffles and auctions.

In partnership with Ballymena Business Centre we fund Projects selected by the 4 Ballymena Clusters.

This year they are adding to this list with a Christmas Tree Charity Event, sponsorship of a media cup for senior media students at the NRC and a Charity Bowling Tournament.