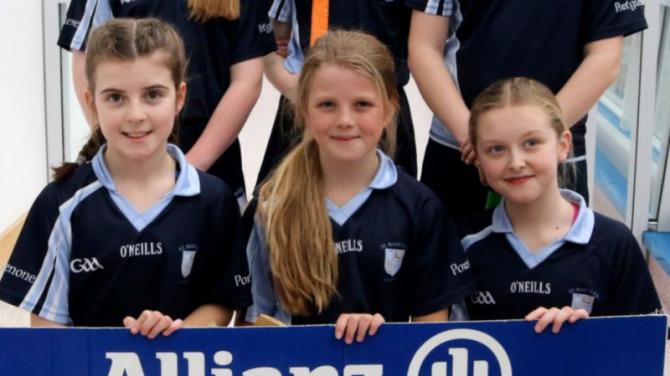 MILLQUARTER Primary school ran rings round the others when they won the annual South West Cumann Na mBunscol indoor 5 a-side camogie competition at the Antrim Forum.

The teams were divided into two groups, each playing the other once to decide semi-final spots.

In group one Mary Queen of Peace Glenravel, Millquarter and St. Patrick’s Rasharkin all secured opening wins and continued this fine form throughout their group games, only losing points to each other.

After all teams in this group had played their 7 games, it was Millquarter who topped the group only having lost once.

On equal points in joint for second spot were St. Patrick’s Rasharkin and Mary Queen of Peace with the Glenravel school on the strength of beating the Rasharkin girls in the round robin stages going through.

In group two Mount Saint Michael’s Randalstown dominated with a strong, skilful team, winning all games in the group stages and securing top points to make the semi-final with ease.

Taking second place was an energetic St. Mary’s Portglenone team, only losing one game to the group leaders.

Narrowly missing out on a semi-final spot was Millquarter’s second team and Creggan who both produced some promising performances.

The Glenravel girls were first to score and only in the final seconds did Mount Saint Michael’s come very close to drawing level. At the final whistle a goal separated the teams with Mary Queen of Peace victorious on a score line of 1–0.

St. Mary’s Portglenone and Millquarter played in the second semi which required extra time to decide a winner.

The first to score a golden score was Millquarter who secured their spot in final.

With the finalists having already played each other in a close encounter early on in the group stages, which Millquarter won 2-1.

They repeated the dose winning the final three goals to nothing