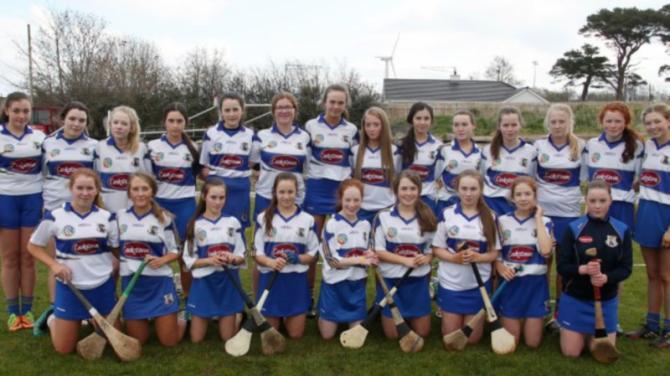 A couple of goals from Garron Towers Niamh McNeill and one each from Monique O'Boyle and Niamh Graham were sufficient to put clear blue water between the teams in this Fr Davis camogie Cup semi final.

In a repeat of last seasons semi when the Masgherafelt girls adavanced , this thirteen point victory was ample revenge for the hurt inflicted then with bows attached.

Although there was little to distinguish between the teams in terms of general play, St Killian’s were sharper in front of the posts and full-forward Niamh McNeill’s two first half goals set her team up nicely for the win.

Monique O’Boyle was the other first half goal-scorer as St Killian’s turned around with a 3-1 to 0-1 lead, Aoife McOscair the only scorer for the Derry side.

After the break Erin Loughran struck a fine goal from long range to open the scoring and briefly the Tower girls looked in a spot of bother on the back foot.

However eventually they broke upfield and Niamh McNeill pointed from a free. That score seemed to lift them and they hit the next three scores, all points from Monique O’Boyle, Aisling Mulholland and a 45 from McNeill.

Although Aoife McOscair hit back with a point for St Pius X, Niamh Graham killed off their hopes of victory with a well struck goal from 30m. Fittingly Niamh McNeill completed the scoring from another long distance free.

The second semi-final is unlikely to happen before the Easter break. It is between St Conor’s Clady/Kilrea who finished second in St Killian’s group and St Patrick’s Academy Dungannon who topped the other group.

All Saints Pushed all the way by Glenravel

It has been several years since these local rivals met in league action and in a hard fought game at Fr Maginn Park the Saints marched on to victory.

With just four points in it, Glenravels elevation to this grade could well be rewarded although they still have to register a victory.

The visitors took a grip of the game with a fluid first half display which saw them open up a six point lead at one stage, but after the change of ends the Glenravel men fought their way back into the game, only to be outdone by a freakish goal from distance midway through the half from midfielder Sean McVeigh.

Ballymena were first onto the scoreboard when Kavan Keenan pointed from play on four minutes but Con Magees edged in front with points from Conor McNeill and Declan Traynor.

The Saints then hit a purple patch with five consecutive points from Michael McCarry, Shea O’Brien and three from the very impressive Brendan McDonnell who was certainly proved a thorn in the side of the home team.

Josh McKeown restored some pride for the Glensmen with a well taken free on seventeen minutes but Damian Kelly replied in kind for the visitors a minute later.

Glenravel full forward Martin McCarry wandered out the field and put over a monster point from fortyyards out to leave the home side trailing on a 0-4 to 0-7. Ballymena pushed ahead with three on the trot from Rory McVeigh, Sean McVeigh and Brendan McDonnell with a further exchange between McDonnell and Keown following.

McKeown hit another for Glenravel just before the break but trailed 0-6 to 0-11 at the change of ends.

A barren opening ten minutes on the was followed by a burst from the home side who hit three points between the tenth and thirteenth minutes closed the gap to two Josh McKeown providing all three, two of them from frees and it could have been better had David Higgins goal effort not been turned round the post by All Saints 'keeper Steven McEvoy.

Just when it looked like the Glenravel might spring an upset, disaster struck for them at the end of the third quarter minutes when a long speculative shot from All Saints midfielder Sean McVeigh deceived goalkeeper Johnny Fyfe and somehow ended up in the Glenravel net.

Despite the set back the home team responded well when Aiden O’Donnell scored with a neatly fisted point only to see All Saints replacement, Diarmuid McNally stretch Ballymena’s lead again to five, 1-12 to 0-10.

At this stage Glenravel made a few changes in personnel with Conleth O’Loan and Michael Laverty being sprung from the bench and when David Higgins reduces the deficit to four they still looked in with a shout.

However the Saints drew on all their experience to add two more late points from Michael McCarry and Ciaran McGarry to put the game beyond Glenravels reach..

However drama was to follow in injury time when Conleth O’Loan forced a turnover ball which spilled into the hands of Sean McKay who soloed in and coolly dispatched the ball low to the corner of the All Saints net to reduce the gap to just three.

Suddenly there was just one score between the sides, but again the men from the ‘town’ showed their craft and experience in the final few minutes when man of the match Brendan McDonnell capped a fine individual performance with his sixth point of the game to seal it.

County Champions Get Off the Mark

A first-half penalty from Michael McCann proved the difference in the end as Cargin edged out Hannastown 1-12-0-12 at Toome in their second game in the Division 1 league. After their deafeat at the hands of St Endas , this result came as some relief to the County champions.

The hosts were already 0-3-0-1 to the good in the opening quarter of a first-half that saw Justin Crozier and Ryan Straney dismissed by referee Darren McKeown as tempers frayed in the aftermath of a foul on Owen McKeown.

Mick McCann’s penalty approaching the twenty minute mark had his side in ascendancy and despite Lamh Dhearg ending the half stronger the Hannahstown men trailed by a goal at the break.

Ultimately the visitors failure to edge in front would prove to be their downfall – the sides were tied on four occasions in the final half hour, but each time the hosts regained the lead and in the end it was one they refused to relinquish.

Both sides showed their attacking intent from the outset and it was Cargin who edged ahead inside of two minutes through Michael McCann.

Paddy Cunningham hit back on the turn at the other end to level at 0-01-0-01 after five minutes of play.

Tomas McCann restored his sides lead through a converted free and the hosts extended their advantage as Gerard McCann bustled his way through and shot between the posts to give Cargin a 0-03-0-01 advantage inside of the opening ten minutes.

On twelve minutes Owen McKeown was chopped down and tempers boiled over – referee Darren McKeown was forced to intervene and red-cards were shown to Justin Crozier and Ryan Straney after order was restored.

On eighteen minutes Cargin had a fantastic chance to move further ahead as Paddy Larkin’s challenge was punished with the award of a penalty.

Mick McCanm seized responsibility for the kick and sent Stephen Tully the wrong way to give the Erin’s Own men a 1-03-0-01 lead.

Paddy Cunningham responded through a converted free to double his tally for the evening – in restoring his sides five-point advantage; midfielder Gerard McCann also doubled his evenings account before the break.

A second converted Cunningham free reduced the deficit and after Ben Rice forced a turnover, possession was quickly switched and Lamh Dhearg turned defence to attack with Owen McKeown popping the ball over the bar to leave the score 1-04-0-04 at the interval in Toome.

Lamh Dhearg picked up where they left off at the break as Ben Rice burst forward and shot over the bar.

Owen McKeown added his second point of the evening and six minutes into the second-half Ryan Murray opened his evenings account to level the game at 1-04-0-07.

Michael Clarke put an end to Lamh Dhearg’s momentum as the corner-forward hit back at the other end to edge his side into the lead once more.

A third point from the energetic Owen McKeown levelled for the second-time in the half – but Michael McGuckin was forced to watch as McKeown’s shot could so easily have nestled into the top corner.

Cargin responded positively to the Lamhs challenge and back to back points from Kevin McShane and Paul McCann gave their side a 1-07-0-08 lead approaching the midway point.

Lamh Dhearg rarely troubled the hosts rearguard in terms of goal mouth action – on the one occasion of note that they did; Cargin had goalkeeper Michael McGuckin to thank for denying Pearse Fitzsimons after a wonderful one-two with Paddy Cunningham.

The veteran Lamh’s attacker would draw his side level for the third time within the opening fifteen minutes of the half with back to back converted frees.

The sides traded further scores through Michael McCann and Cunningham (free) as the game was evenly poised with twelve minutes remaining at 1-08-0-11.

Cargin regained the lead for the fifth time in the half through a Ciaran Bradley point and they never relinquished their lead in the aftermath doubling it by the 50thminute.

A sixth converted free of the evening from Paddy Cunningham made it a one-point game approaching the home straight.

But a late double from Tomas McCann in the final five minutes ensured that Cargin ran out 1-12-0-12 winners at the end of an action packed midweek encounter.