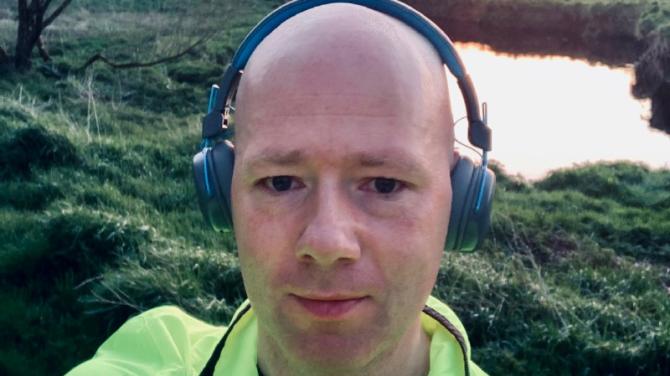 BALLYMENA man Brennan McCallion has raised over £1,250 for the Great Ormond Street Hospital!

The 42-year-old ran 15k a day throughout May - finishing off with two back-to-back marathons so that he could reach his target.

Brennan, a former fire fighter, said he wanted to get involved in the money raiser for GOSH, as he knows how brilliant a job their staff do.

He saw a challenge put out by GOSH, inviting runners to Run 100K in May!

The cash target set by GOSH for each runner was £150.

Brennan soon met, and then overtook, this amount - and he decided that for every £ coming in, he would run an extra kilometre!

“After completing the first one, I had to really focus on preparing for the second one,” outlined Brennan.

“I was glad when it was all over. I am very pleased at raising the money for Great Ormond Street Hospital, and also highlighting the excellent work they do.”

And he thanked every single person who contributed to his fund raiser.

He recalled spending some time there following the birth of his son.

“Myself and wife Anna have two young kids and last year spent some time in hospital with our son after he was born,” said Brennan.

“We know the incredible work children’s wards and hospitals do.”

He said he could not image how difficult it must be for the families of Great Ormond Street Hospital who have ad to have children admitted.

“I wanted to do something to help raise much needed funds and awareness,” he said.

The Northern Trust employee has been running for over 12 years, being involved in sport of some sort since his school days.

All his runs, including the marathons were local either on the roads or in the gym.

“The marathons took me from Galgorm to Broughshane, to Ahoghill then Cullybackey and then back to Galgorm,” he recalled.

“Thankfully my wife and kids tracked my progress on an app and delivered water and snacks whilst I was out running.”

The marathon pledge helped him to raise £1250.

“I’m so happy that people supported me and the Great Ormond Street Hospital. And I’m also so happy that May is over and the running is finished,” he concluded.

His donation page is live until this Friday, June 17.