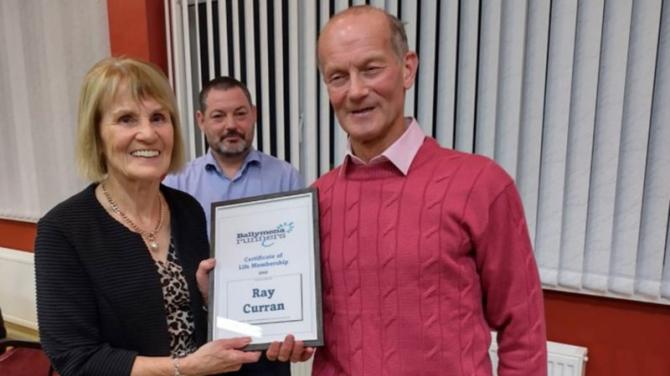 AS part of Ballymena Runner’s 30th Anniversary celebrations, club members met at Eaton Park at the weekend for a celebration dinner.

The club wish to thank Club Women's Captain, and Committee member, Emma Donnelly for all her hard work in organising the event.

Thanks also to Richard Montgomery and his staff, and Ballymena Rugby Club, for the catering and the use of the venue.

As part of the celebrations the club took the opportunity to officially present Club Life Membership to Ray Curran and Stephen Brown. The awards were presented by Club Legend Brigid Quinn.

Ray and Stephen join Robert McGaughey, Stephen Armstrong, Robin Alexander and Carrol Legget, to receive this recognition for their massive contribution to the club over many years.

On behalf of the entire club we want to thank Ray Curran and Stephen Brown for all they have done, and continue to do, for our club.

Stephen said: “I really want to thank every club member for the journey we have had together. The changes in this time have been phenomenal.

“Our membership rose from around 60-70 to a pre covid high of 388. Ballymena Runners has a well-deserved reputation as a club welcoming everyone.

“We were the first club in Northern Ireland to roll out a Couch to 5K (‘Cosy Sofa’) programme, and then restructured our training to accommodate a broader base of runners. This took literally dozens of coaches who supported and encouraged typically anxious non running people to start running.

“We have had over 2,000 people through this course and some of the comments we have had regarding the change to people’s day to day life are truly inspirational.

“We developed the first parkrun in Northern Ireland outside Belfast at Ecos.

“This was a big leap of faith and quite an undertaking, and from the outset it was very much a Ballymena Runners project which involved quite a few members, driven by Susanna Allen.

“Our community and charity work continues to open doors and facilities to us. We have good relationships with a host of community organisations throughout the borough.

“We have worked with local schools spreading the message at grass roots level that “running is for everyone”.

“We encompass every ability, from C25k to international athletes and I am proud of every member who wears a Ballymena Runners vest. This is down to the ability and commitment of coaching at all levels. The dedication of our coaching team underpins what we can offer every one of our members.

“I know there’s not a club in the country that offers as many training options as Ballymena Runners.”