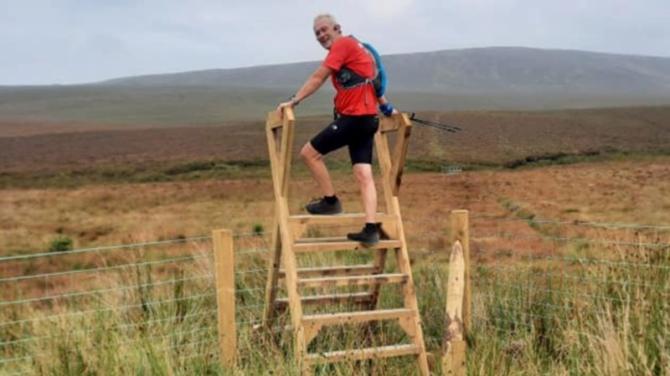 ON Saturday Robin Alexander ran 100km in one day from Portstewart to Cushendall, over the 3 mountain peaks of Slieveanorra, Trostan and Lurig, to raise awareness and much needed funds for the North West Mountain Rescue Team.

The NWMRT provides a search and rescue service for those requiring assistance in mountainous, remote or hostile environments.

They are dependant primarily on the generosity of the general public. Northern Ireland Charity No: NIC100059

As dawn was breaking Robin had made it from Portstewart along the coast through Portballintrae and on to Ballycastle, 30 miles done before stopping for a quick break and a bacon ‘buttie’ before heading along the Moyle Way.

Ballymena Runners Club member Susanna Allen joined Robin for around 20 miles which were mainly off road - where the mountain rescue team can be called out.

Robin said: “As a member of NW Mountain Rescue Team I am acutely aware of the valuable service we provide to members of the public on a totally voluntary basis, funded mainly by donations, and are on call 365 days a year (and yes we even went out on Christmas day 2020!)

“As more people are holidaying at home, and enjoying the beautiful NI outdoors, unfortunately members of the public are getting into difficulty in rural and challenging terrain, and requiring our help, with call out's on the increase.

As a result, I set myself a running ch”allenge, over some of the difficult areas we have been tasked to in the past, in order to rescue walkers and climbers”

Robin climbed Slievenorra, Trostan and finally Lurig, before jumping into the water in Cushendall (Robin’s grandson Finn insisted that Granda finished in the sea!)

“I would like to thank Susanna Allen who said she would run a few miles, but ended up doing 20! Thanks also to Lucy O’Dell from Glens Runners ,who joined us on Trostan. Gemma Moore and Sinéad Scullion then got me up Lurig, after waiting an hour for me to arrive,” said Robin.

“This type of challenge doesn't happen without a great support crew, so massive thanks to Callum, Michael, Ciara and Charlie dog. Lastly, huge thanks to my wife Tricia Alexander for following me round from 3:00am in our motorhome, feeding us all bacon butties and tea.”

“Well, my biggest motivator was my sister Jenny Brammer, who passed away with cancer 2019 and I dedicate this to you Jen,” he said.

Robin has also set up a JustGiving page which you can access on his Facebook page or through Ballymena Runners (ballymenarunners@hotmail.com)