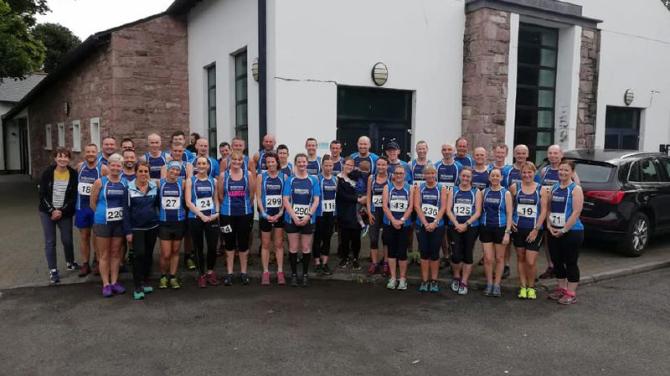 IT proved to be a successful afternoon on Saturday when Ballymena Runners lifted the men's team prize (Jason Wilson, Kieran Scullion, Connor Reid and Nigel McClintock) at the annual Lurig Challenge Run in Cushendall.

In addition, there were numerous age category prizes collected by the club amongst them Jim Stewart (with a new personal best), Mark Alexander and Kieran Scullion.

The club got amongst the silverware on Friday evening in Mallusk when John Robinson, John Hasson and Brigid Quinn all picked up age category victories over the five mile course.

Despite the torrential rain, Ballymena Runners turned out en masse when no fewer than 108 turned out on Monday evening for the Broughshane 10k and 5k races.

Kieran Scullion was first to break the tape in the 10k, crossing the line in 35:10 while, in the 5k, Geraldine Quigley secured second in the ladies race!

The event was organised by the North West Mountain Rescue Team in conjunction with Broughshane & District Community Association and Ballymena Runners.

It was quite a momentous week for Ryan Armstrong. Last Sunday he won the Causeway Coast Half Marathon and followed it up at the weekend by repeating the feat at the East Antrim Marathon Series FATLAD event in Armagh. Well done Ryan!

Congratulations to James Hamilton who has been selected to represent Athletics Northern Ireland at the Manchester International to be hosted at SportCity, Manchester on 14th August 2019.

Congratulations to Gillian Wasson who was 3rd lady at the 'Seven Sevens'! This is a NIMRA Championship 'long' event covering 19 miles and 9,000 feet over the seven highest mountains in the Mournes.

Congratulations to Claire Martin who completed the Isle of Man marathon on Sunday, recording a time of 4:14:38 and finishing second in her age group.