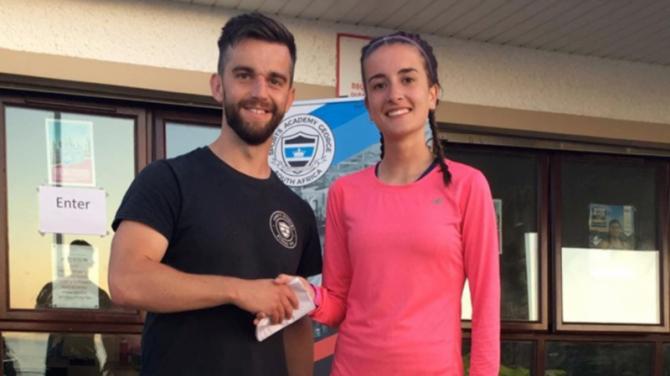 LAST Wednesday night's 'Naked Run' was a huge success thanks to the hard working club members of Ballymena runners on duty.

The proceeds went to charity partners Childrens' Cancer Centre chosen by club member David McKean with his friend Ian Thompson. The event raised over £670 for a great cause.

Runners ran the event 'naked' eg: no timing devices were permitted, and had to guess their time beforehand with the placings decided on who finished closest to their estimate.

In the male race it was even closer with Leon Dorrity and Paul Kelly finishing in exactly their predicted time – down to the exact second!

And in third place Seamus Kelly who was just one second off his predicted finish time.

Well done to Ballymena runners who competed at the NI masters track championships in Belfast.

Both Michael Bennett and Noel Connor picked up gold medals in their respective events. Michael came home first in the M45 1500 metres, while Noel lead the pack in the M55 5000m.

Eight members of the club took in some marathon action on Saturday morning when they completed the 26.2 miles of the Antrim Coast Marathon.

A number of athletes from the club braved the heat, hills and humidity of Friday evening to tackle the Ards Half Marathon, regarded as the toughest event of it's kind in Northern Ireland.

Jim Moore was first to finish in 1:28:50, alongside John Robinson with an identical time and just ahead of John Hasson in 1:29:32 - all three securing top 20 places.

Congratulations to Zara Surgenor who finished 1st female (and fourth overall) at the Bob & Berts 5k on Thursday evening in Portrush.