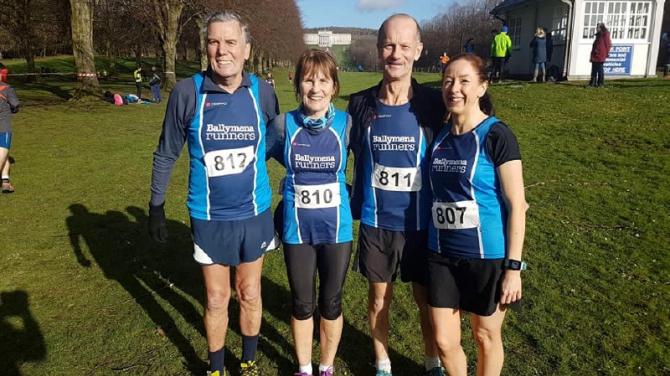 THE penultimate races in the Northern Ireland Cross Country League took place in the surrounds of the Stormont Estate on Saturday afternoon.

Despite the passing of Storm Erik underfoot conditions were fine for the most part.

First up was the combined Ladies and Men 60+ category. Ray Curran was first home from the club, sixth male overall and first in his age category. Sinead Scullion ran well too in the three mile event.

Ben Morrow led the Men's team in the 4-mile event, gaining an excellent sixth place and second in his age category.

He was supported by John Robinson (61st), Paul Connolly (104th) and Jonathan Johnston (177th) in the 'four to count' team event.

Last Sunday four club members travelled to Spain and competed in the Torremolinos Half Marathon.

Neil Douglas showed he is back to full fitness again finishing in 1:20:18 and taking third place in his age category.

In the recent Raheny 5 in Dublin, both club members James Hamilton (26:17) and Sinead Scullion (35:35) set new personal best times for the 5-miler with Sinead taking two minutes off her previous best!

Congratulations to Judith Worthington who was first lady home (sixth overall) in the Randal Run 10k at the weekend.

Organised jointly by the PTAs of Randalstown Central Primary and Mount St. Michael's PS, the event was held in the grounds of Shane's Castle.

Congratulations to Jack McKenna who won the 'overseas' prize at Carnethy 5.

The race held in the Pentland Hills, just outside Edinburgh, saw Jack cover 5.7 miles and 2900 feet in just 62 minutes.