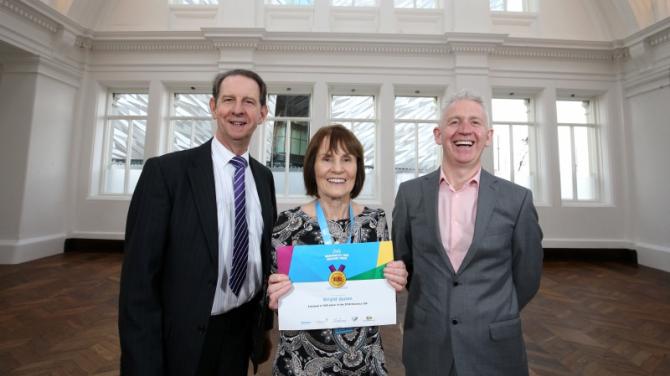 BALLYMENA Runners club member Brigid Quinn has finished in the top 20 in one of Northern Ireland’s most prestigious series of 10-kilometre running races!

Sponsored by managed cloud IT firm Novosco and organised by Glenn Grant, owner of electronic timing chip company ChampionChip Ireland, in partnership with Athletics NI, Running NI and Forestside, the Grand Prix features hundreds of individual racers of all ages and ability as well as club and corporate teams.

Novosco’s Managing Director, Patrick McAliskey, praised all the runners who took part in the 2018 Grand Prix.

“A massive well done to everyone who took part in the Novosco 10k Grand Prix in 2018. Congratulations to Brigid for placing among the top runners this year,” he said.

“The Grand Prix is one of the many highlights of our calendar and is aligned well with Novosco’s community and culture. We’re really looking forward to launching the 2019 Novosco 10k Grand Prix in the coming weeks.

“The series is open to new and experienced runners of all ages and ability, so we hope to see more competitors step up to starting line to make their mark on the series rankings in the year ahead.”

“Whether it was one fixture or the full calendar of 17 races, well done to all of this year’s runners.

“Congratulations to everyone from the Ballymena area who participated in the series, particularly Brigid for ranking among the top competitors.”