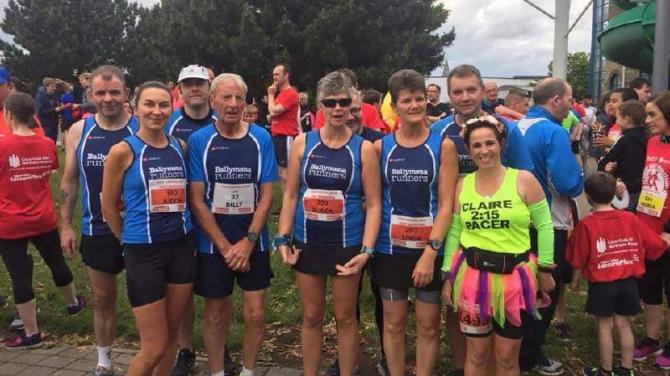 THE sun was out at the weekend and so were Ballymena Runners!

They took on marathons and 10ks in Lisburn and Randalstown as well as well as celebrating the success of Cosy Sofa graduates.

Ballymena Runners were very well represented at the Lisburn Half Marathon and 10k on Wednesday night, an event which has become one of the biggest and most popular in Northern Ireland.

As well as the honour of having a number of runners named in the pacing team, amongst them John McGerty, Claire Martin and Rodney Agnew, club members produced strong performances across both events in what was an almost perfect night for running.

It was a race James enjoyed.

He said: "I had a great run. The first half was tough, with a strong headwind.

“The second half was fine. It was a super race with a great atmosphere.”

Also enjoying her run was Alison Foster who powered her way to a personal best 1:47:17, describing it as “a good course in good conditions.”

On Thursday evening a number of Ballymena Runners made the short trip to Randalstown for the annual 10k race around the grounds of Shane's Castle.

Many congratulations to those who completed the recent club Cosy Sofa to 5k programme in Cullybackey.

In what is an excellent introduction to running those tentative and nervous participants on the first night developed and progressed over the weeks to graduate with flying colours at the recent School Run 5k in support of the Diamond Primary.