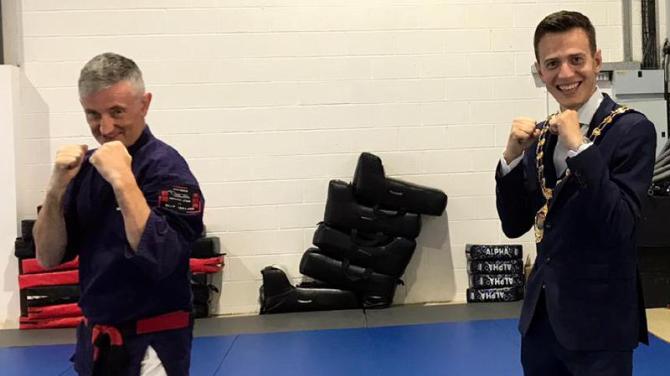 ALMOST four months of lockdown left the Dojo members desperate to get back to their training!

So, when the Martial Arts & Fitness Centre was given the go ahead to open on July 10 - David Toney came up with the idea to have a unique moonlit session at one minute past midnight!

Sixteen ju-jitsu enthusiasts eagerly waited for the roller-shutter door to be lifted and then took up their individual mat space to get back to the training they love.

One young woman from a sister club, travelled from Craigavon to make the session.

Amy McCrickerd said she was nervous about coming because she had only met the volunteers and some of the students during the online sessions.

Afterwards she said her trip had been “totally worth it.”

“The coaches and students are so welcoming - they really put me at my ease, and the session was fantastic. I’m so pleased I came,” she told Guardian Sport.

“After all - it’s really a one off to be able to train for the first post-lockdown session - and after midnight as well.”

Meanwhile, the new-look Dojo setup at the Woodside Road based centre in Ballymena was visited by Mid and East Antrim Mayor Cllr. Peter Johnston.

He presented certificates to the volunteers who had worked so hard throughout the pandemic.

The Dojo received a certificate to thank the centre’s volunteers overall.

And centre managers, David and Anne Toney, were commended for their efforts to try to keep things going for the community: providing private groups, setting up online support and raising funds for the continued work of the centre.

The special certificates say - ‘Presented by the Mayor of Mid and East Antrim Borough Cllr. Peter Johnston to The Dojo In recognition of their volunteering and contribution to community during Covid-19, July 2020.’

Special mention was made of Senseis Mikey Graham and Steve Meneely who had provided weekly sessions on Zoom for the Dojo Juniors local charity, to boost morale and give the children a small piece of their normal routine.

Parents overall said this was a godsend because lockdown had been testing and frustrating to say the least, for those working and trying to home school in such restricted circumstances.

The two young men are firm favourites with the children who attend the centre, and the fun and humour they brought to their sessions helped their students forget about their fears and gave them something to look forward to each week.

The Mayor got a tour of the facility and the volunteers took him through some of the weapons available for training.

Centre manager Anne said she was impressed at how interested and personable the Mayor was.

“He told us a funny story about his brother trying out a pair of nunchuckas on him when he was younger! I definitely got the feeling we could see him back for a class,” she quipped.

When the Mayor’s presentations were completed, Anne gave him a Budo pass (which is a licence for training) with one year’s free membership/insurance of the club.

David Toney presented him with a martial arts suit or ‘gi’ in his size so he will have every reason to return.

By now the centre has had its first four Junior classes - with an all hands on deck approach by the coaching team to ensure students are well looked after and everything carefully sanitised.

Cleaning is supervised by Sensei Paul Gillan, who, in his working life, is responsible for ensuring our NHS ambulances are correctly sanitised and this gives parents and members added assurance that they are in safe hands at the Dojo.

We wish them well getting back on their feet!